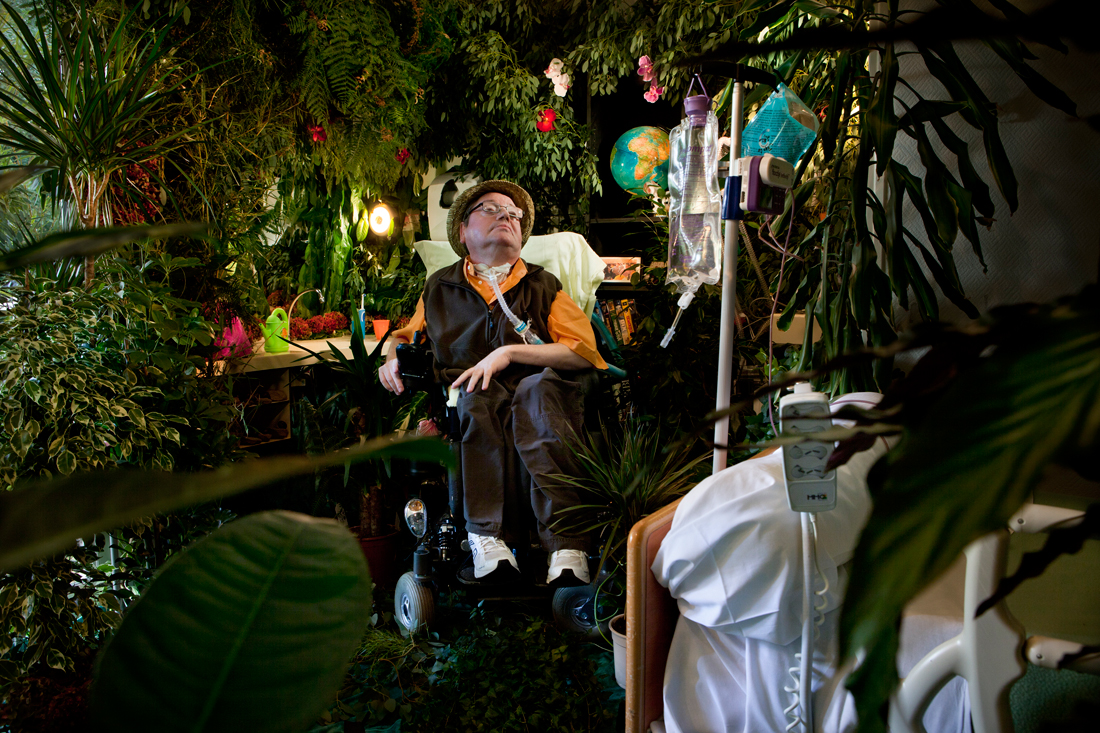 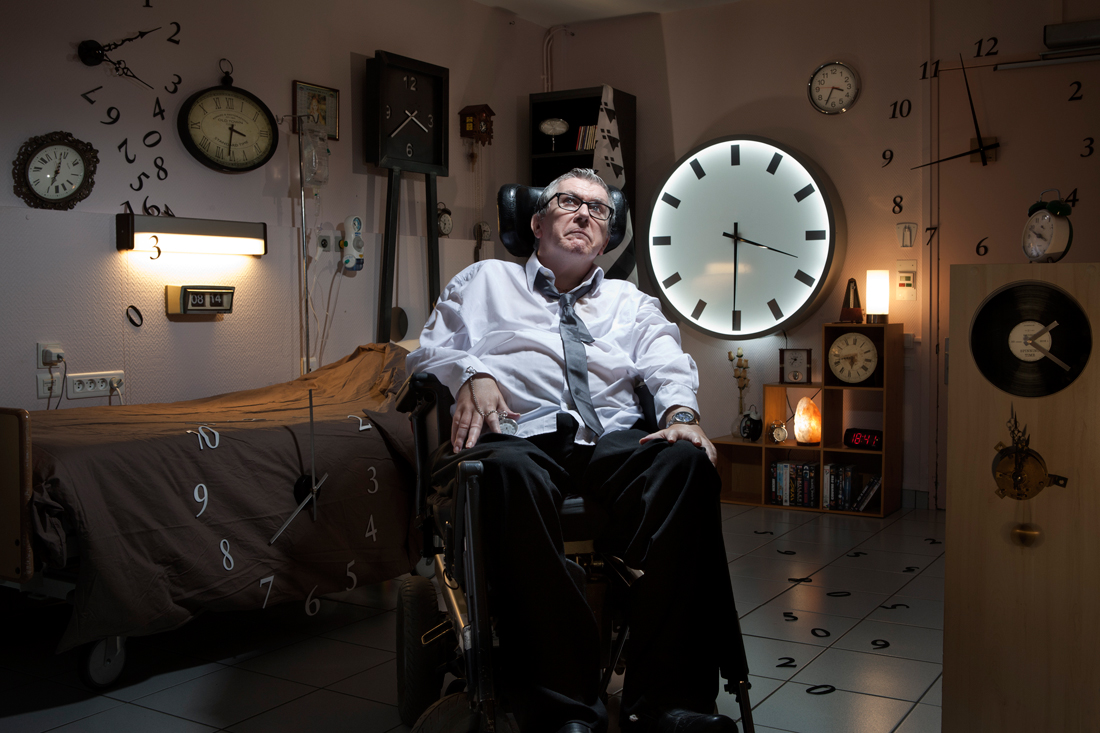 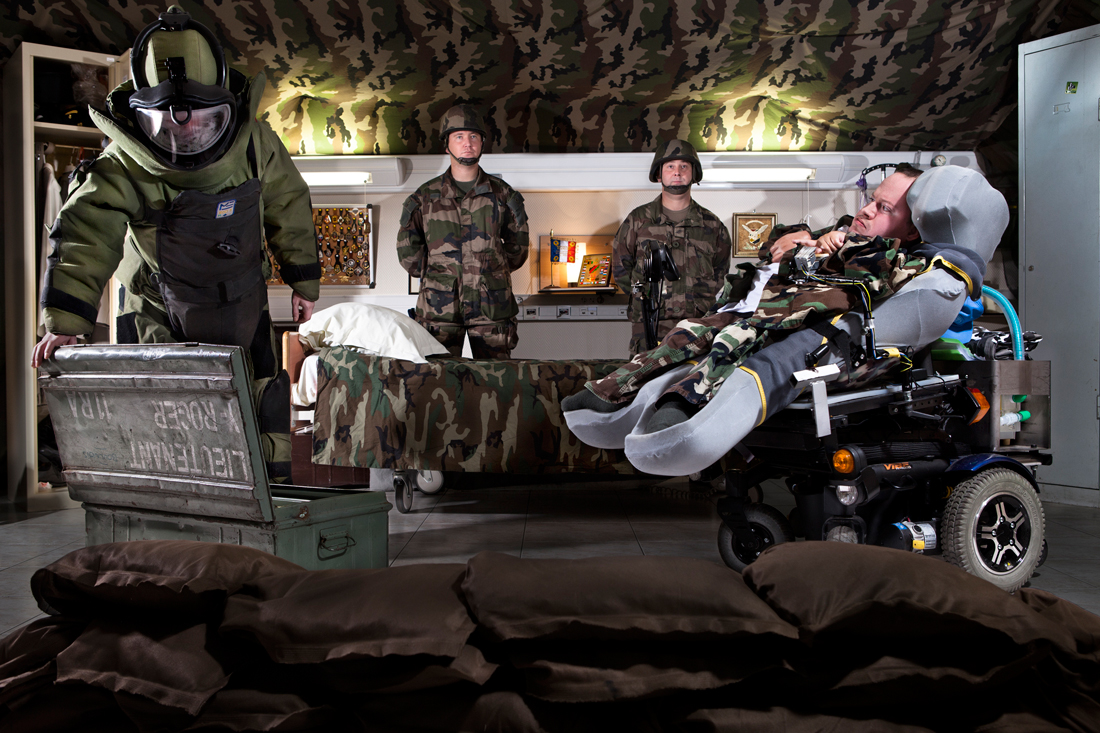 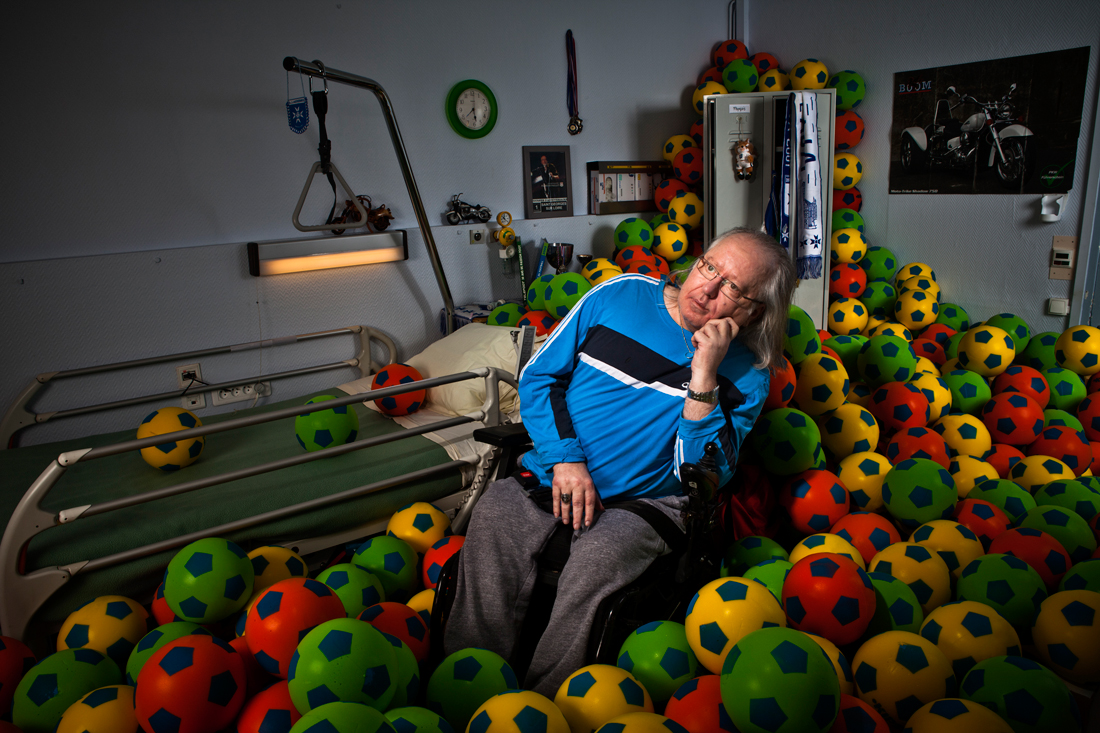 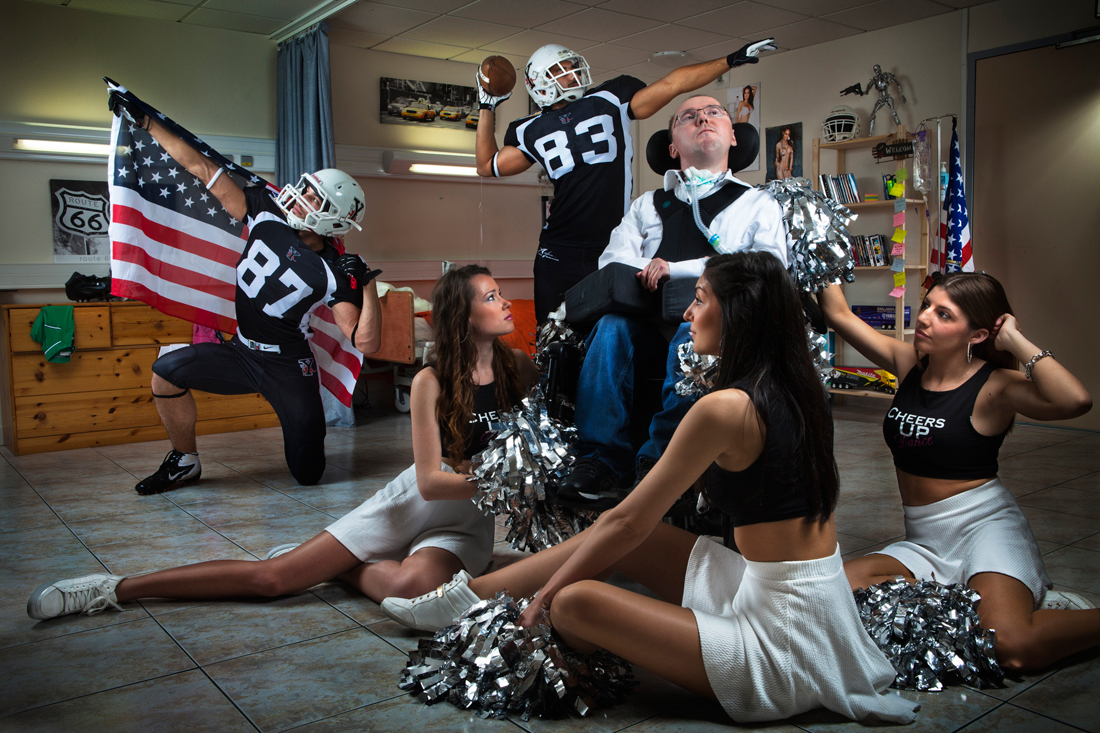 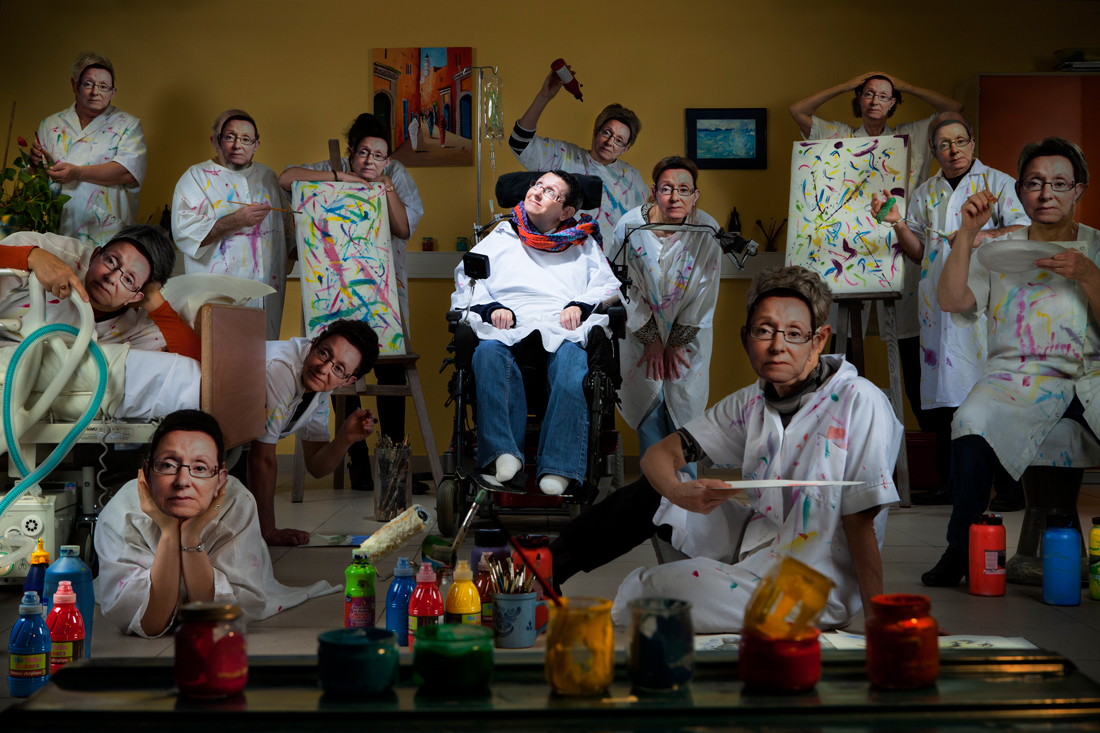 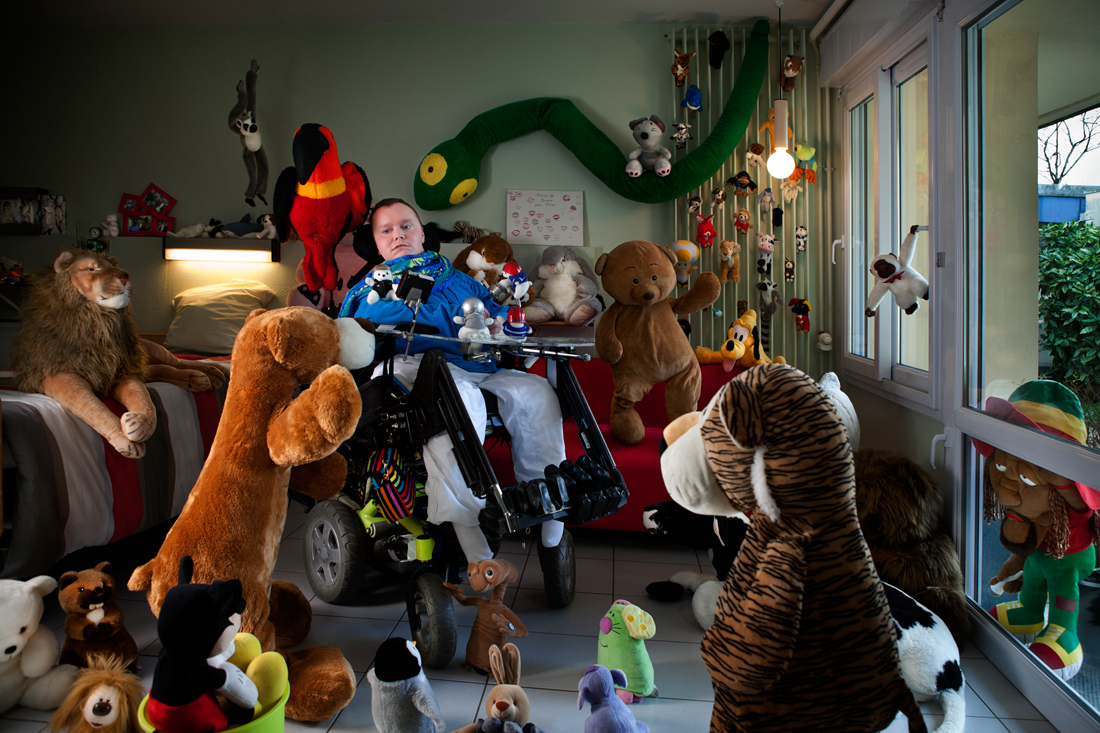 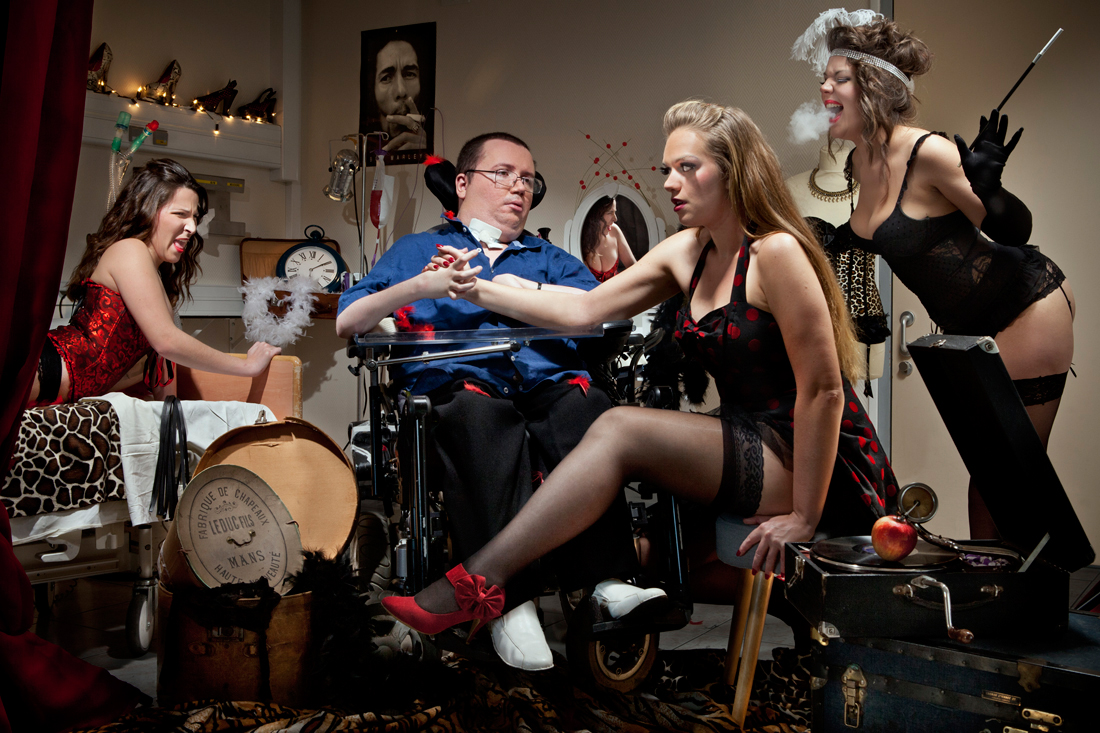 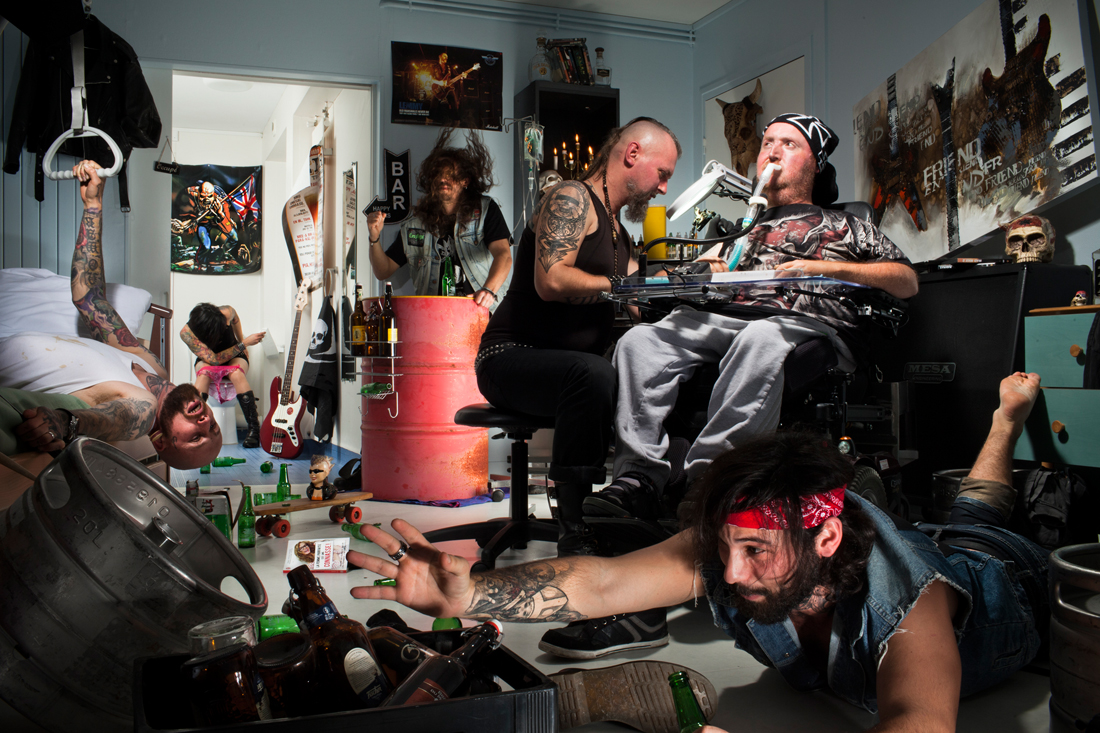 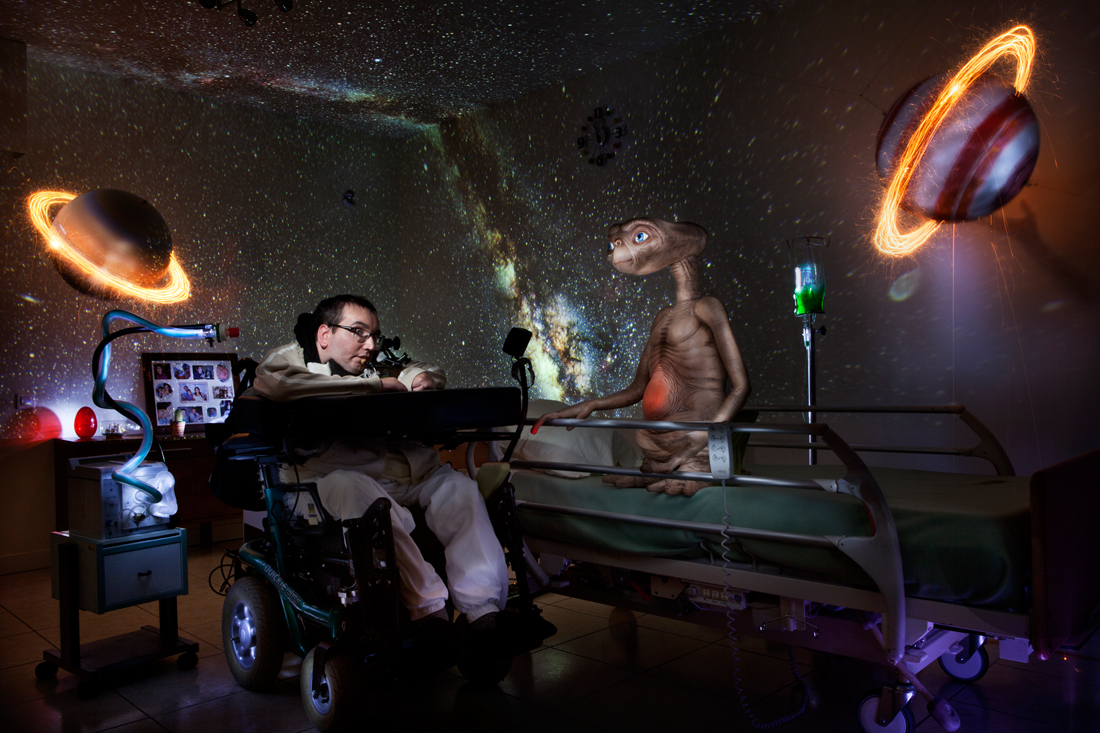 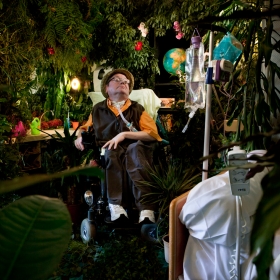 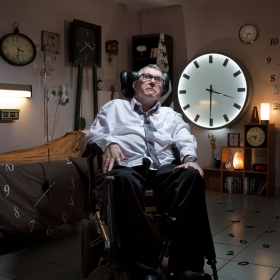 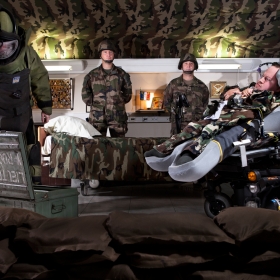 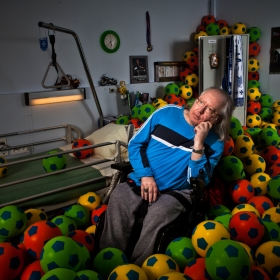 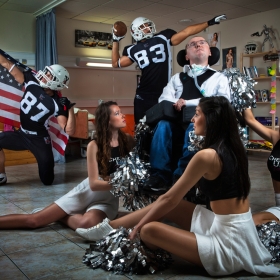 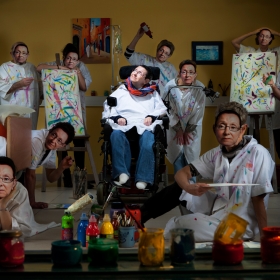 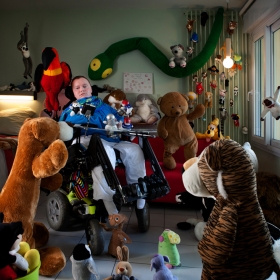 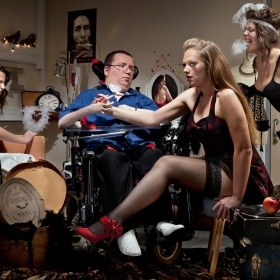 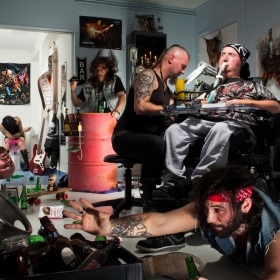 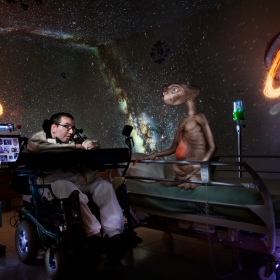 Christophe Hargoues
EXTRA/ordinary
Share
Support this photographer - share this work on Facebook.
Foreword:
In a long-term care facility, forty-five people are living, all suffering from severe degenerative diseases. One hundred doctors and nurses work at the facility. It has taken four years to create these portraits during which time three of the eleven voluntary residents have died : Laurent, Olivier and Julien.

Along one thousand metres of corridors, the residents, in their electric wheelchairs came and go quietly. Each of them have a room, their cocoon, their universe, holding on to their memories and passions. Silence predominates, the movement hardly perceptible, speech is difficult, even impossible as the disease slowly pervades each resident. The extreme dependence is omnipresent and the denouement is known.
It is a world apart, where the perception of time and space is altered: sometimes compressed, sometimes distended.
In their own care bedroom, this photographic representation is first of all the expression of one of their dream, wish, or fantasy. Once restrained, this thought occupies the whole physical space of the room; it invades it to reach a representation in which the imagination supplants the human condition.

After holding meetings and interviews for one year, I realised these eleven photographs over a period of two and a half years. Each portrait required two to three months of preparation of which two days were on-site dressing the medical room for the photographic session. The people present in these photographs are not disguised extras. The photographs are processed in a conventional way without any form of digital alteration.

LAURENT (51 years old) - Room 61, wing L – 2013
Laurent is a plants and flowers lover. For
health and safety reason, they are not allowed
within the residence. So he imagines them
surrounding him.

OLIVIER (54 years old) - Room 58, wing K - 2014
Olivier has lived beautiful things and other less
beautiful. He was in love but it's over. He was a
bartender but it's over. Contemplative and
sensitive, he dreams of a wheelchair adapted to
gain autonomy and no longer waste time.

DANY (33 years old) - Room 55, wing K - 2013
He's a fighter, a warrior, a tiger. He has a kind
of "nuclear bomb" inside him. He would have liked
to integrate the army, for the spirit of brotherhood,
mutual aid and solidarity that it prevails.

FRANÇOIS (55 years old) - Room 36, wing I - 2014
He arrived in 1989, François is the eldest of the
residence. He is an athlete: the blowgun, the
boccia, and above all the wheelchair football.
"Yes, I love football, the team of AJ Auxerre, the
footballers Stéphane Guivarch and Bernard
Diomedes and especially the coach Guy Roux".
François met him in 2000.

GUILLAUME (33 years old) - Room 73, wing M - 2014
He is a Yankee, a truck driver on Highway 66.
He collects the calendars of pretty naked girls on
the walls of his room. He dreams of crossing the
great spaces of the American West.
“Everybody has their own America, and then they
have pieces of a fantasy America that they think is out
there but they can’t see… » Andy Warhol

ANNICK (60 years old) - Room 24, wing H - 2015
She is a painter. Her mouth doesn’t serve her
to speak but rather to paint. In her room, her studio,
she is using watercolour paint, square inches per
square inches. She loves Claude Monet and David
Lynch.

JULIEN (31 years old) - Room 45, wing J - 2013
Julien is a 31 year-old child; he does not
speak a lot; he perpetually smiles at anyone who
wishes to pay attention to him. In his colourful
bedroom, the cartoons channels of the cable TV
runs in a loop; himself and his teddy bears look at
the screen as a window.

MICHAËL (31 years old) - Room 44, wing J - 2016
Michael is a music lover and a literary person,
who listens and watches the night storytellers girls
on his television. A shy man, who loves women and
who speaks about tolerance, humanism and
sensuality.
"Yes, I'm different but like everybody else."

NICOLAS (39 years old) - Room 57, wing K - 2015
On the surface he looks calm but inside he is
full of anger, raging to be there and furious to be
like that. So, he listens to metal, loudly, extremely
loudly. And when he puts some “Slipknot”, other
residents can hear him as far as the wing M. When
he finds an accomplice to smuggle alcohol, he
drinks a good beer to relax; even if it is forbidden
here.

STAN (30 years) - Room 35, wing I - 2015
Stan is a geek. Fan of sciences, astronomy
and computer science; he programs, codes and
decodes. His room is clear and simple, just a few
gimmicks and toys on top of the drawer. He is
non-materialistic because he knows that when you
love travelling, you travel light. So, at night, he
travels.

About author:
My first life is "forestry". I work as an engineer in this sector for 8 years.
In 2007, I leave the wood industry and decide to go into photography. Alongside my orders, my personal works are naturally oriented towards graphic, colorful, and offbeat universes, sometimes tinged with humor and poetry.
Born in Montpellier in 1973, I live and work in Paris.