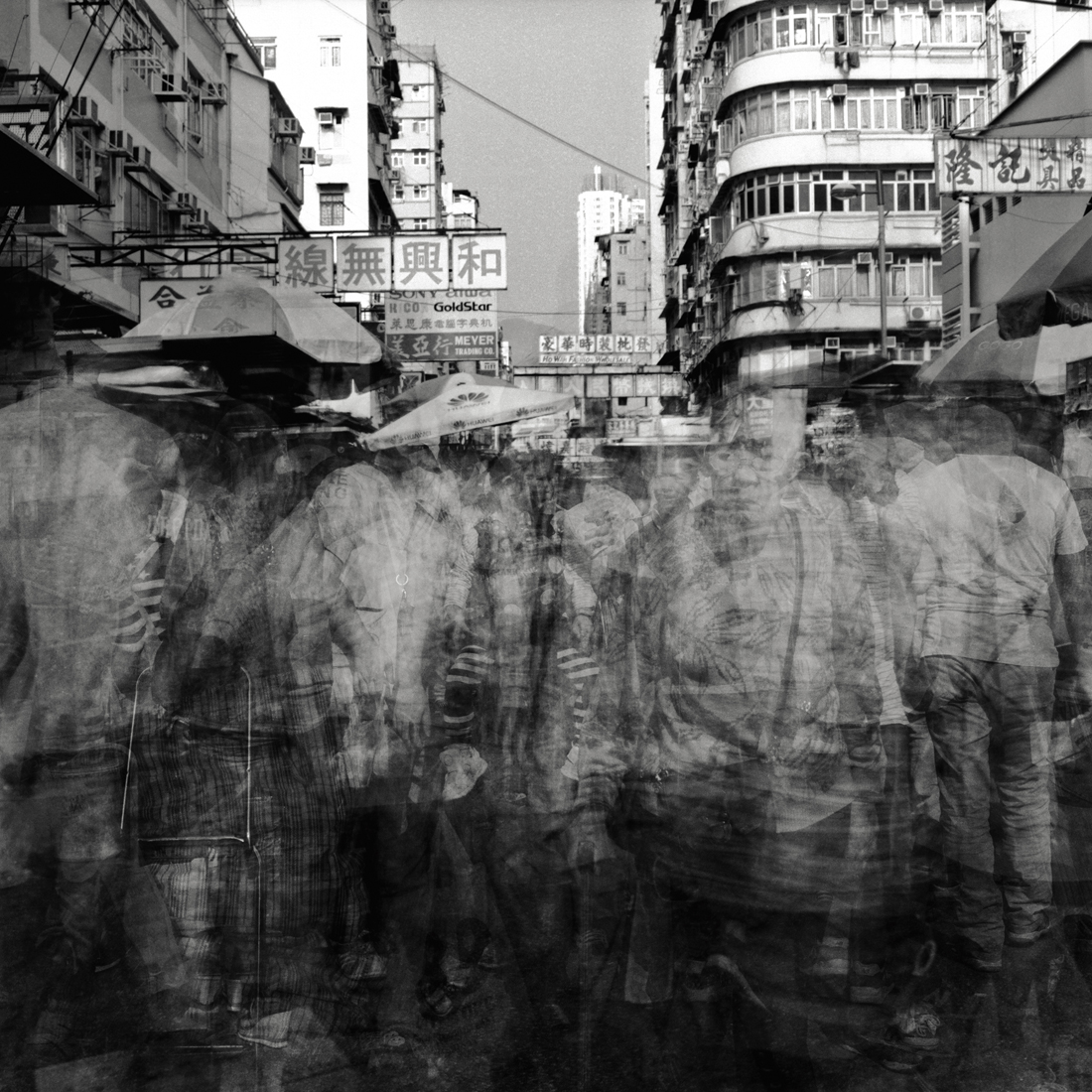 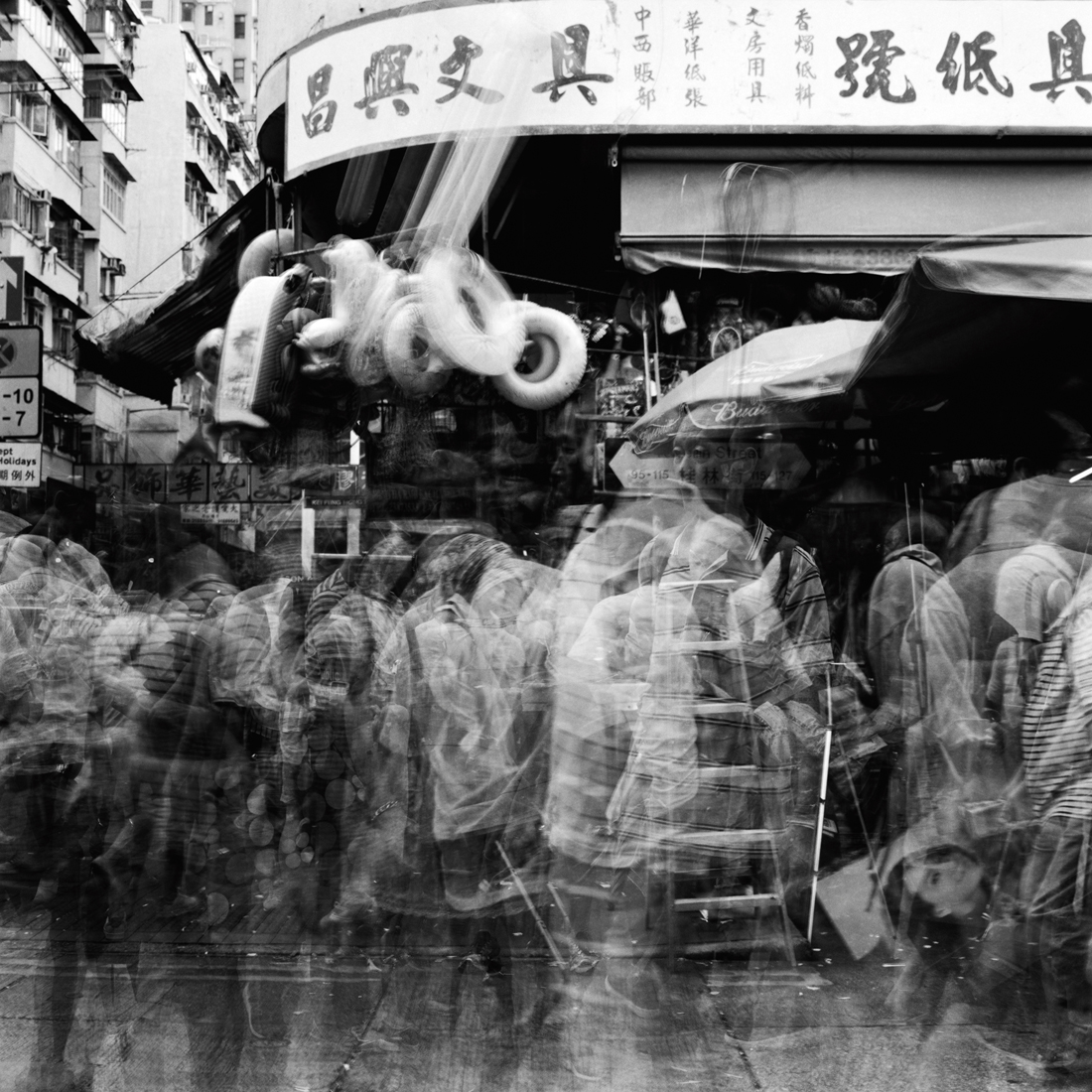 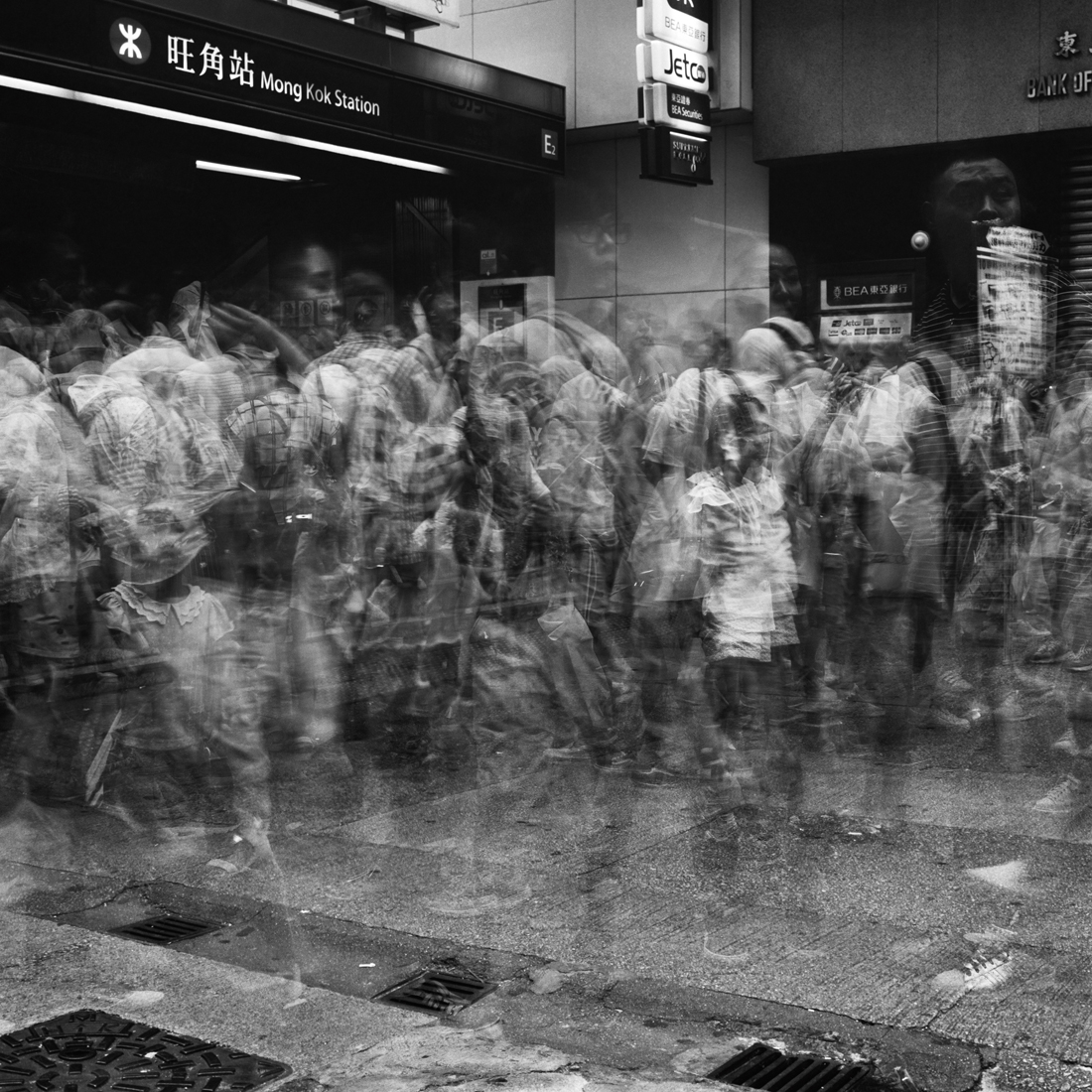 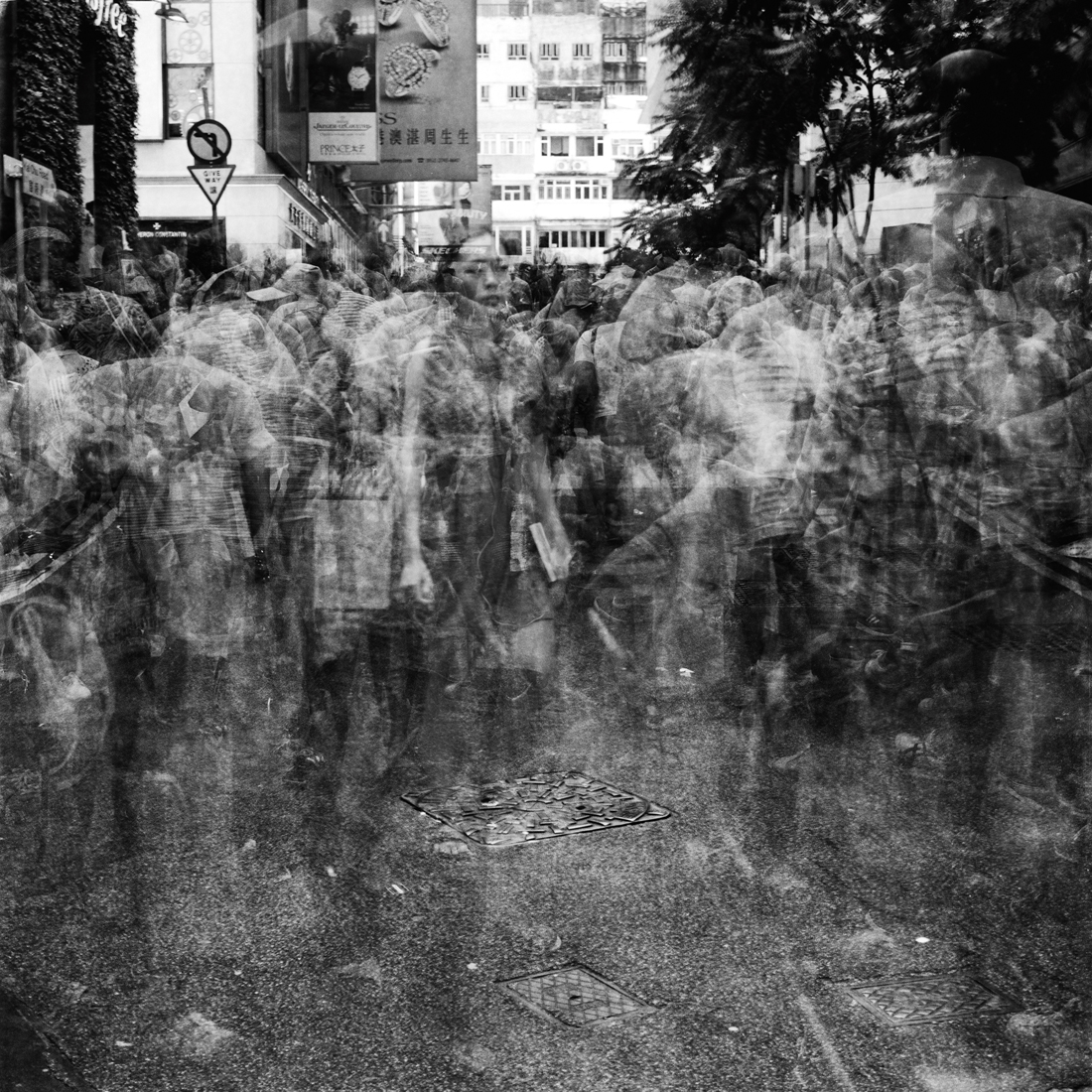 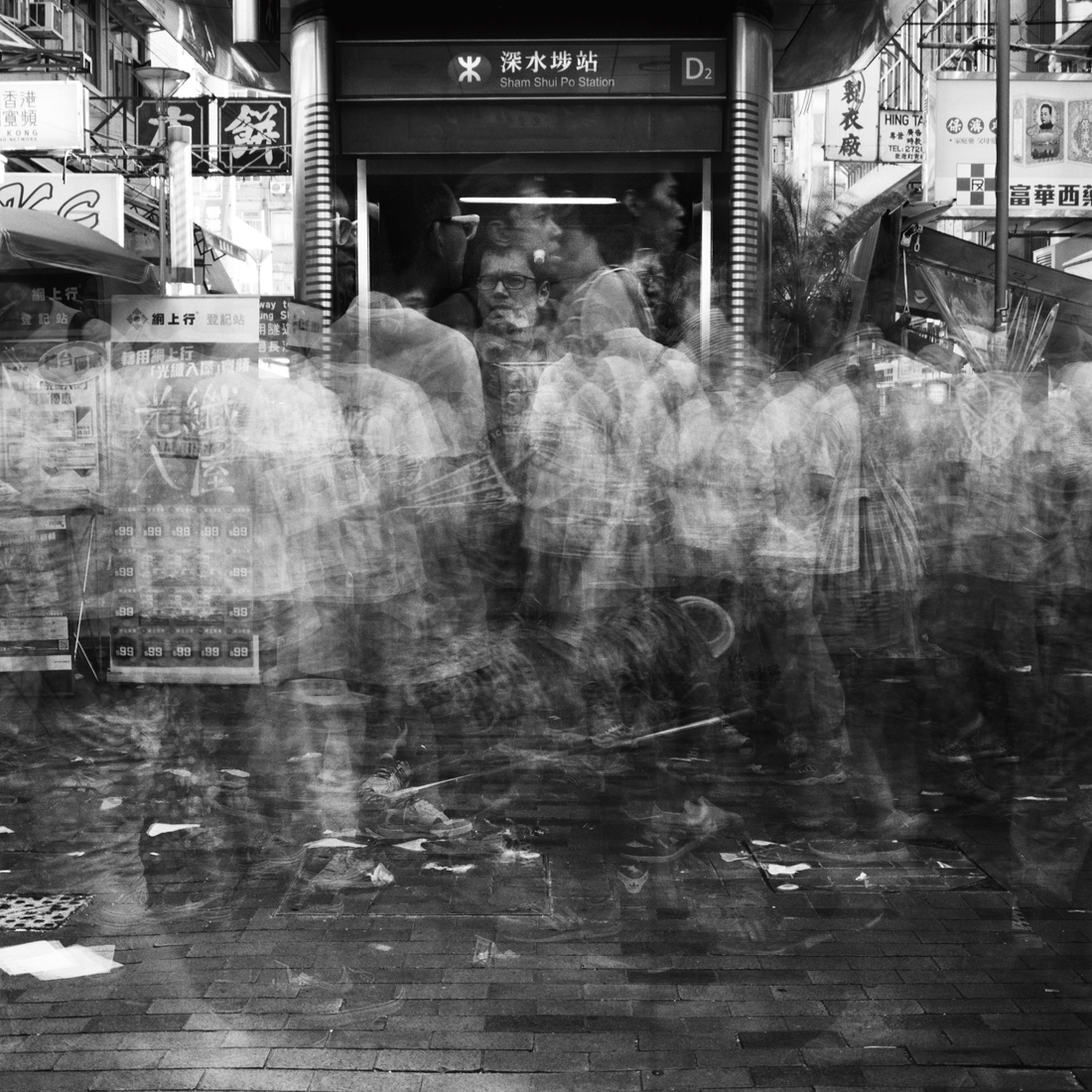 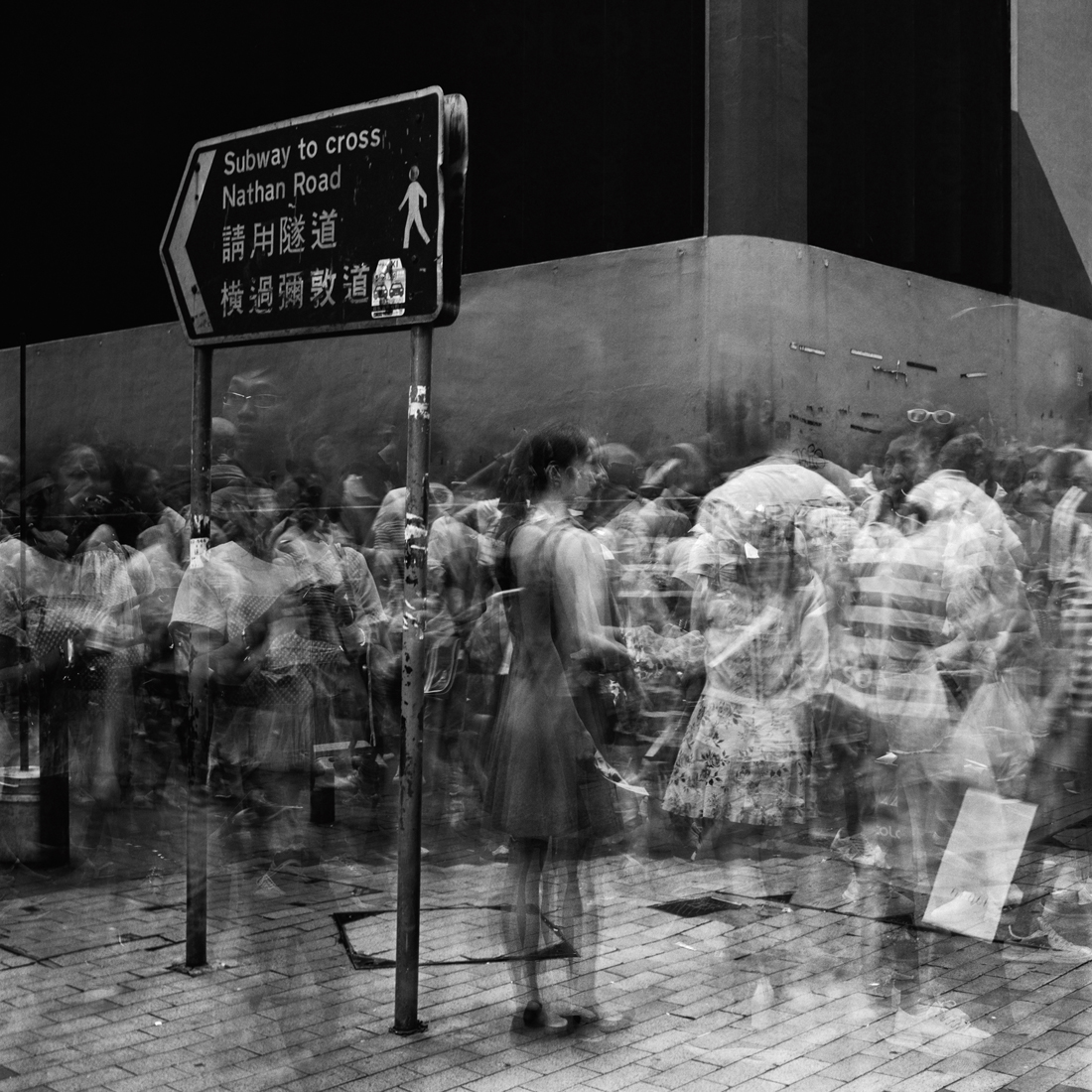 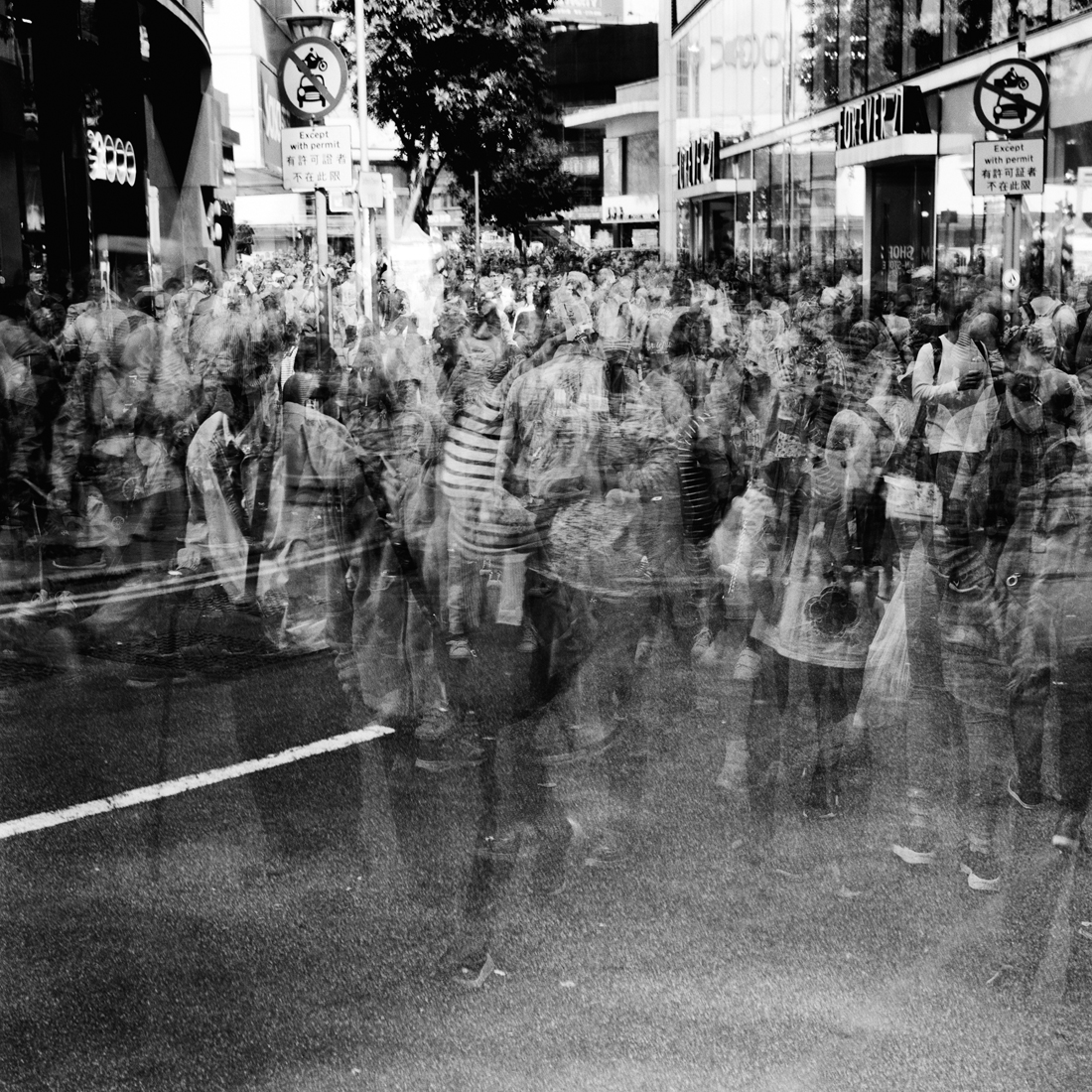 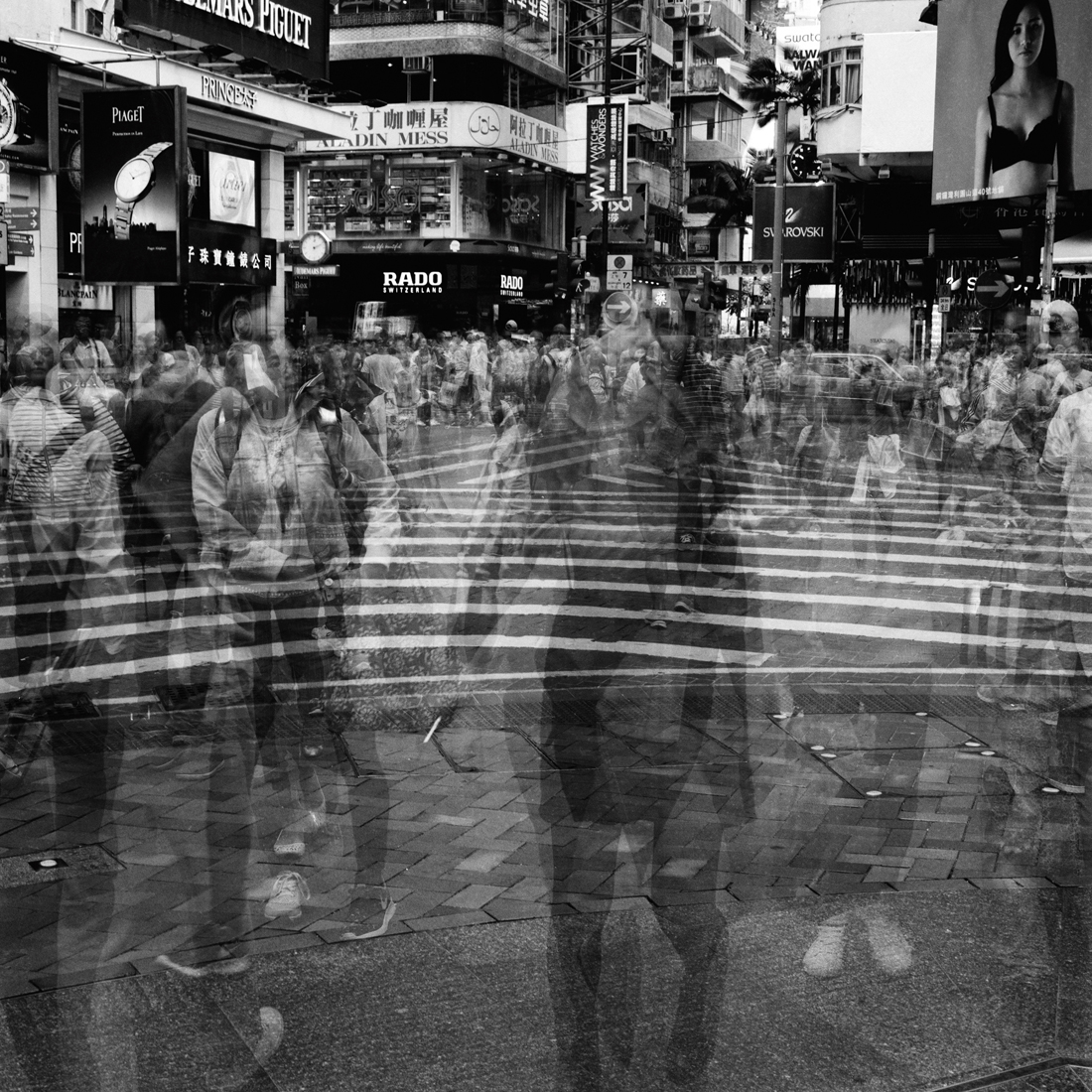 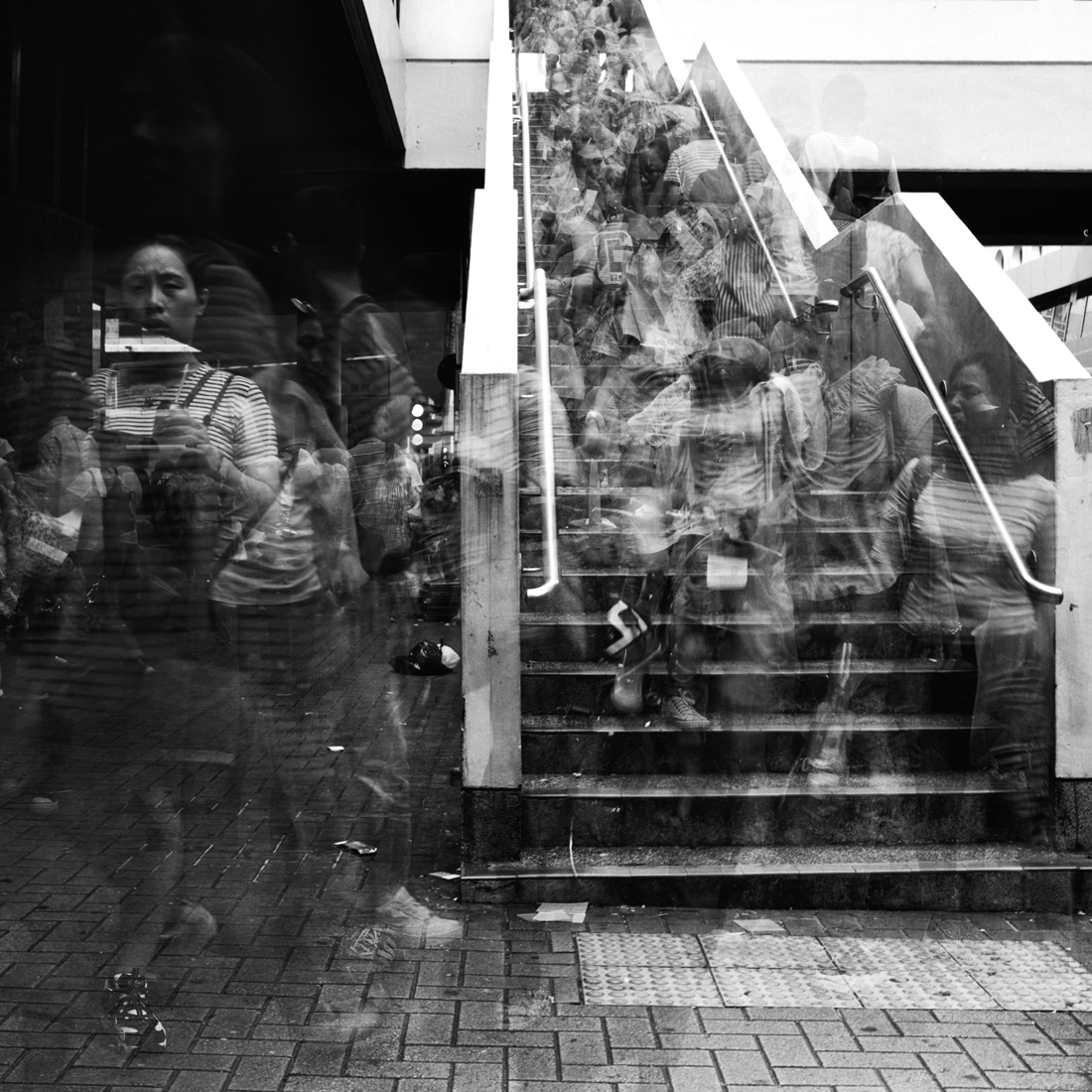 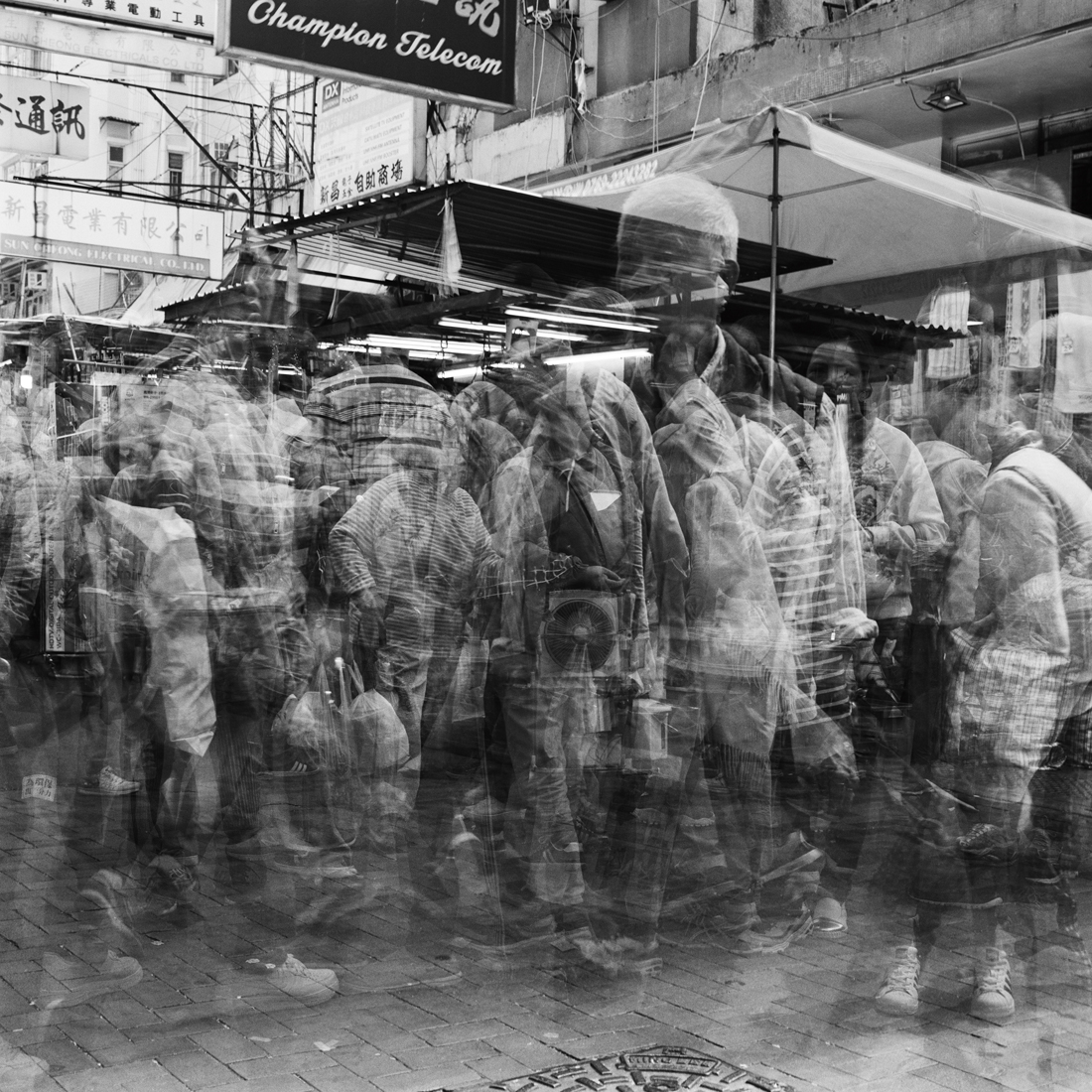 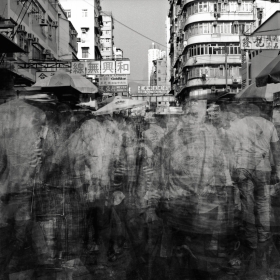 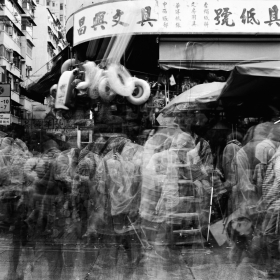 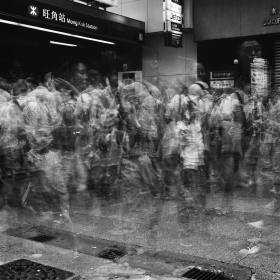 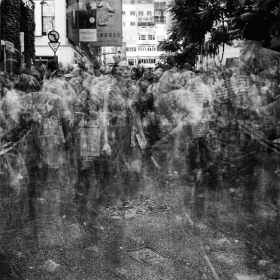 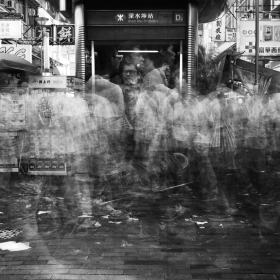 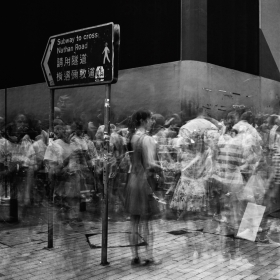 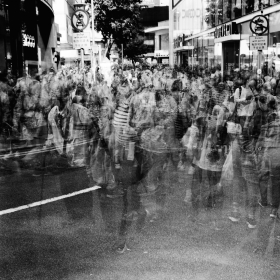 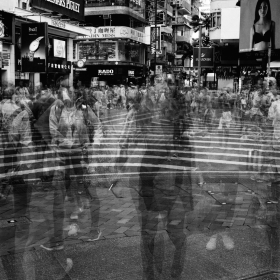 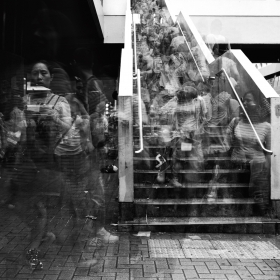 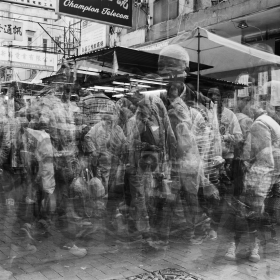 Han Shun Zhou
Frenetic City
Share
Support this photographer - share this work on Facebook.
To say life moves fast in a city is an understatement.
People go through life in an uncompromising, chaotic pace,
overcoming and absorbing anything in their path.
Time in the city seem to flow quicker, memories in the city
tend to fade away faster. Nothing seems to stand still in a city.

A UN report suggested that by 2050, the world's population would reach
10 billion, with three-quarters of humanity living in our already swelling cities.

Hong Kong, with a population of over 7 million but less than 25% of
its land developed, is one of the most densely populated areas in the world.
When I first landed, I was immediately confronted by a society that
is in fierce competition for physical and mental space.

This project aims to capture the chaotic pace of life in this city.
These photographs were created with multiple exposures
of 10 to 25 on B&W film. The tonal qualities of B&W accentuates
the gloominess and despair that I felt.

About author:
Born and raised in Singapore, Zhou HanShun is a Photographic Artist, Printmaker and Art Director.

After graduating from Nanyang Academy of Fine Arts Singapore and RMIT University, he went on to make a living as an art director, and continues to pursue his passion as a visual storyteller and photographer.

He uses photography as a way to explore, investigate and document the culture and people in the cities he lived in.

HanShun has exhibited at the Tumbas Cultural Center in Thessaloniki, Greece for Photoeidolo (2017), the Molekyl Gallery in Sweden, for the Malmo Fotobiennal (2017), the Gallery under Theater in Bratislava, Slovakia for The Month of Photography Bratislava(2017), the Czech China Contemporary Museum in Beijing for the SongZhuang International Photo Biennale(2017), the PhotoMetria "Parallel Voices" exhibition in Greece (2016), the Addis FotoFest in Ethiopia (2016), among others.

HanShun was awarded a Special Mention at the Balkan Photo Festival (2016), Shortlisted for the Hariban Award (2018, 2017) and was a finalist of Photolucida Critical Mass (2016), among others.