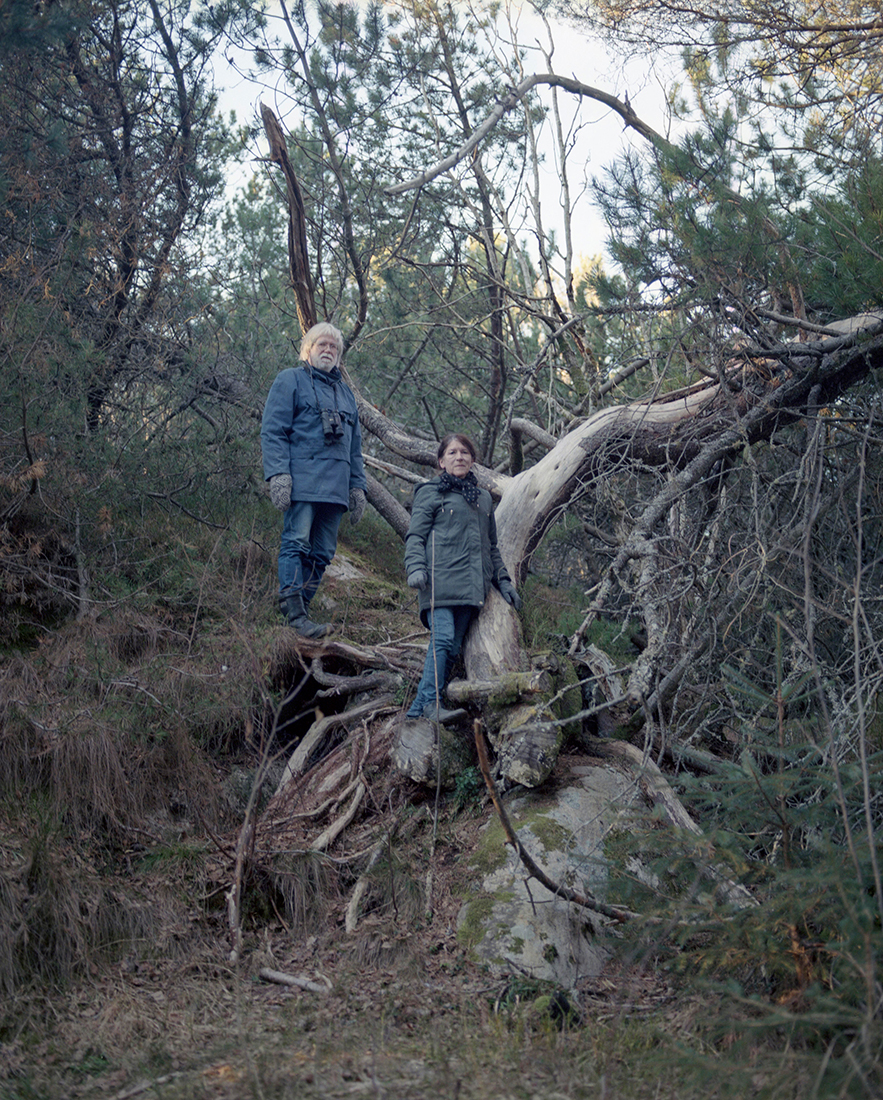 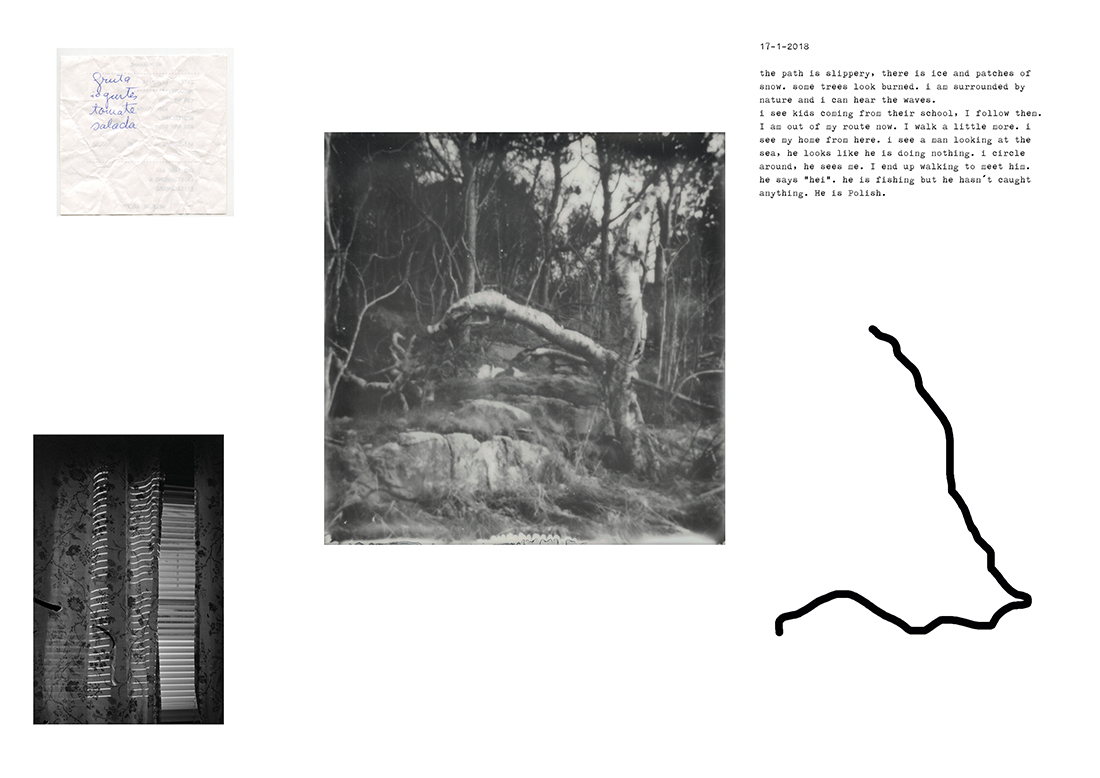 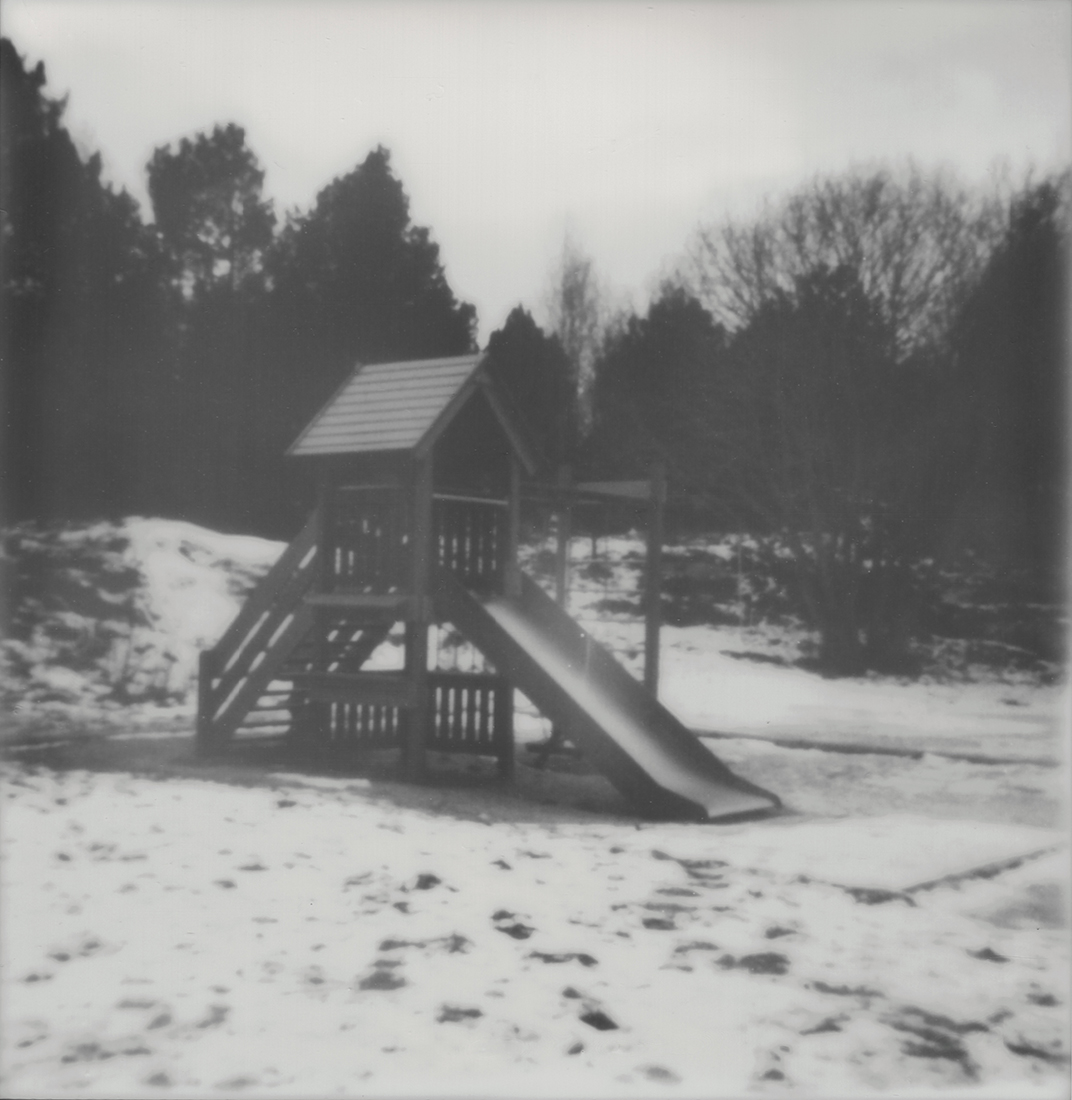 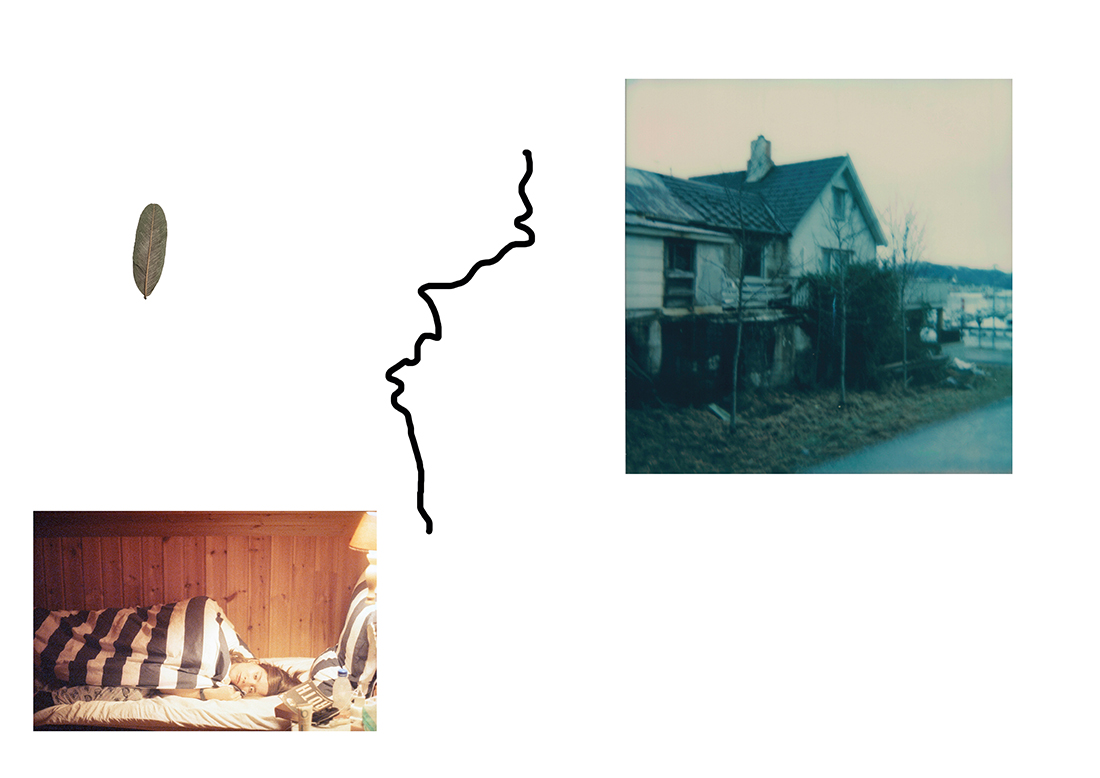 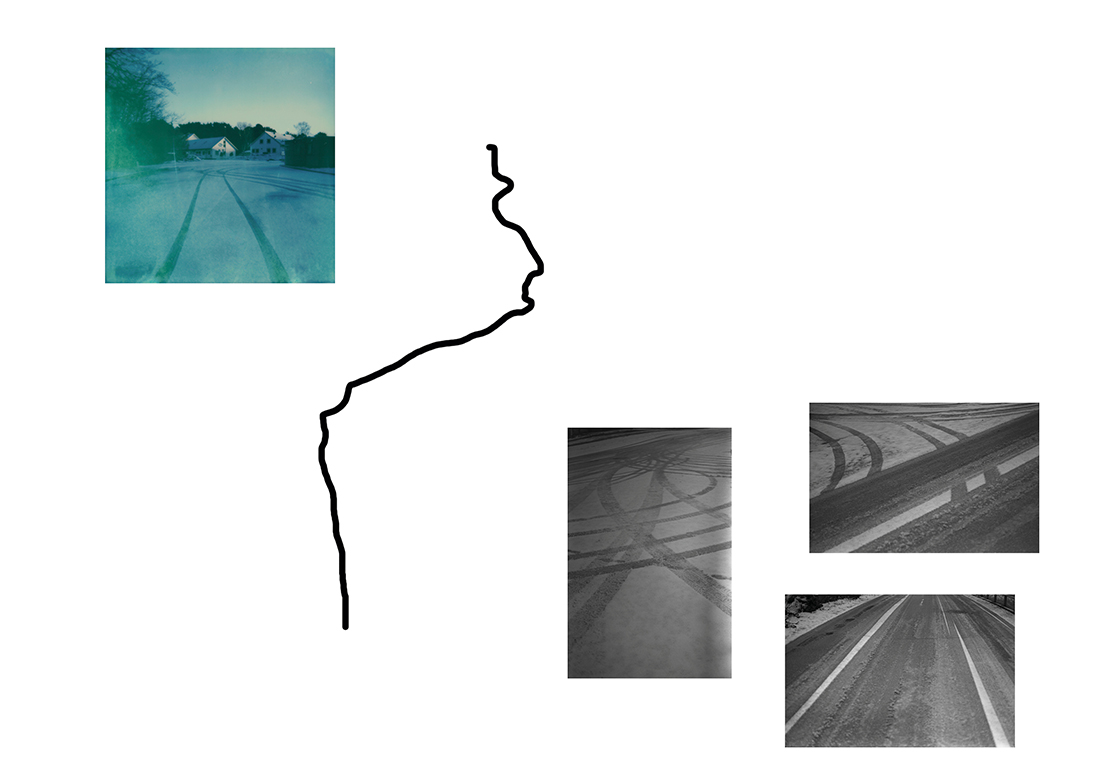 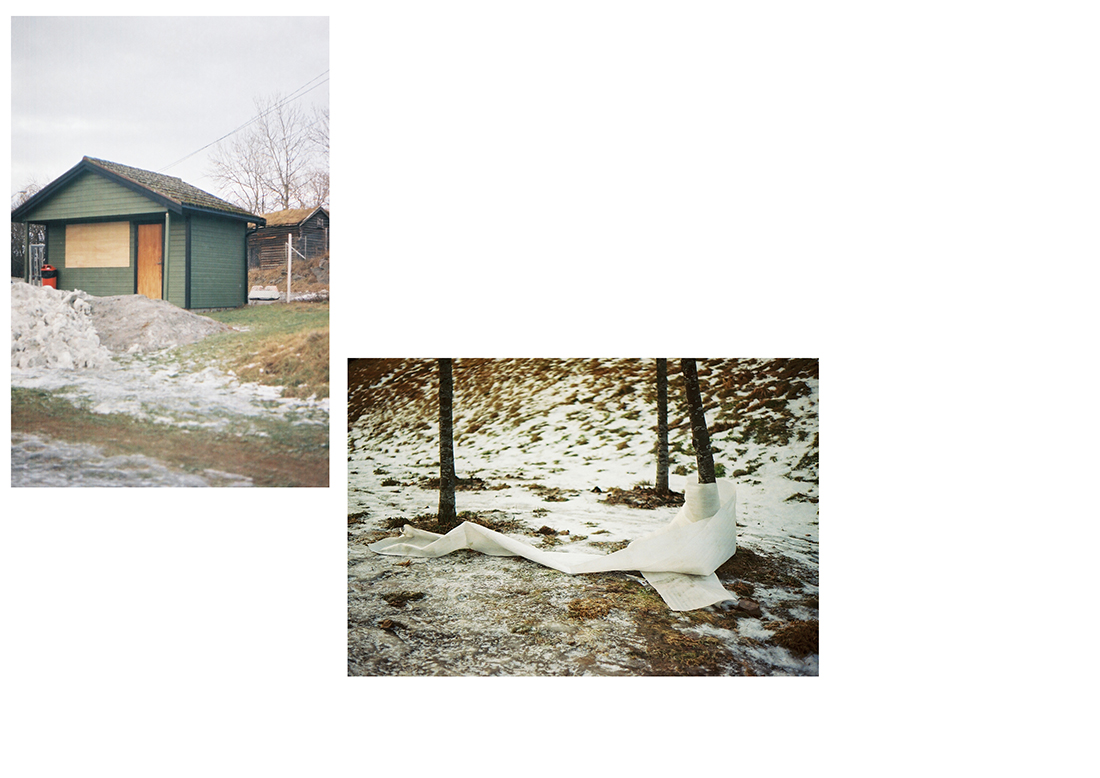 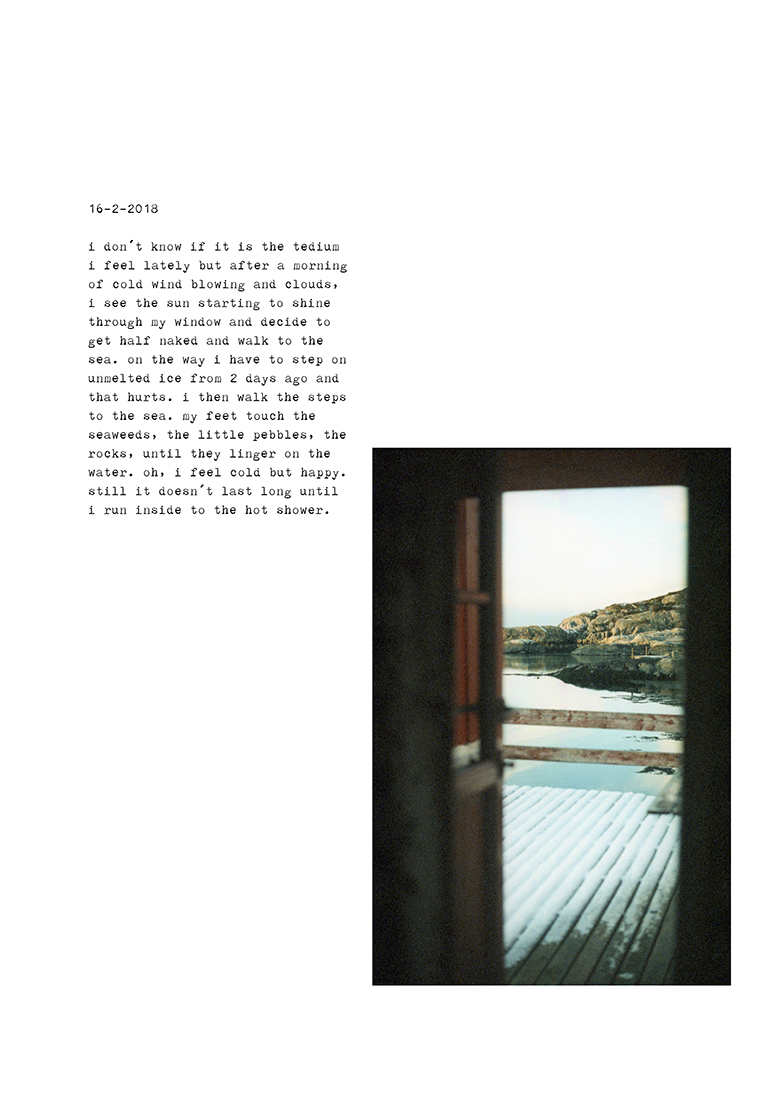 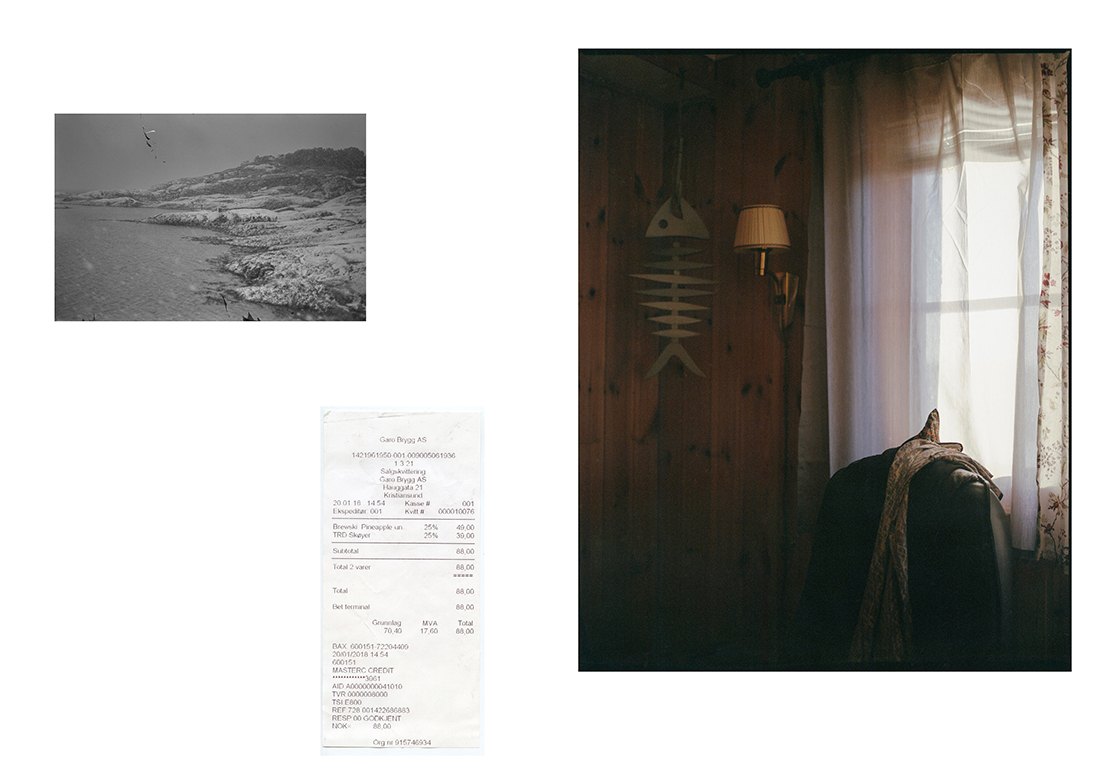 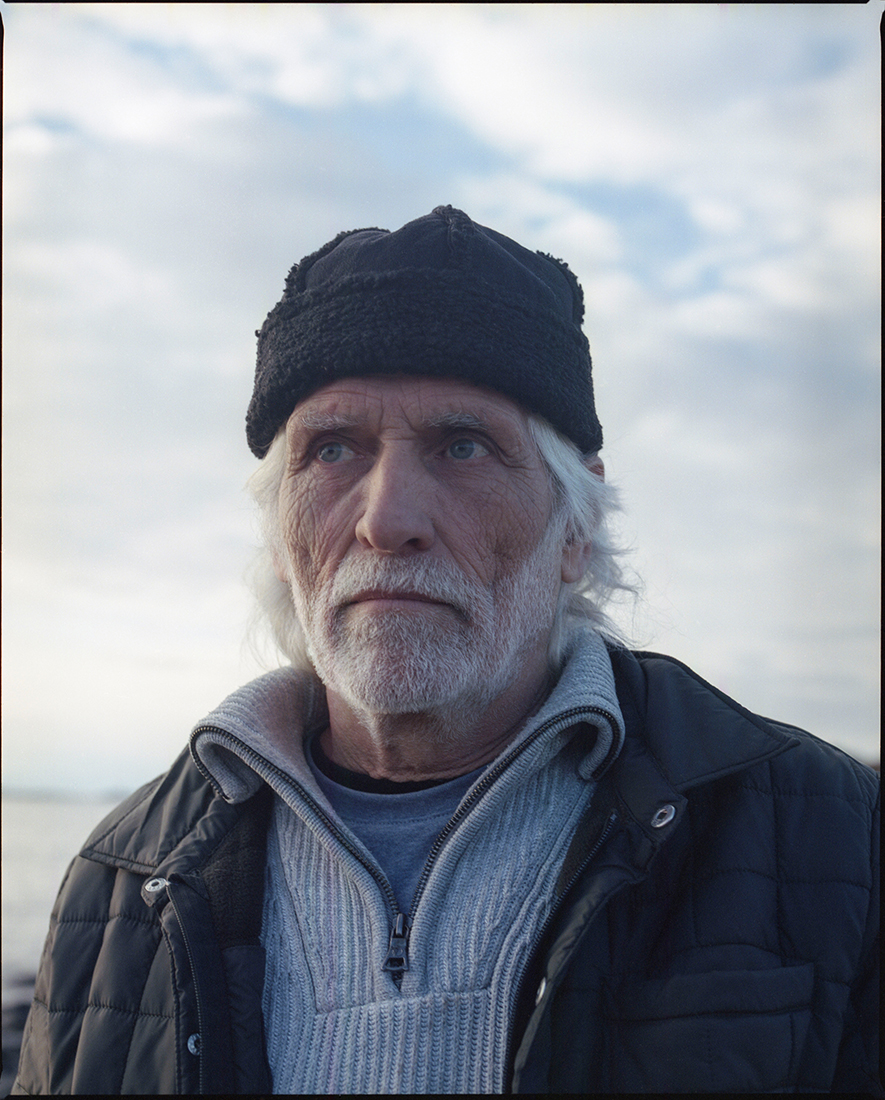 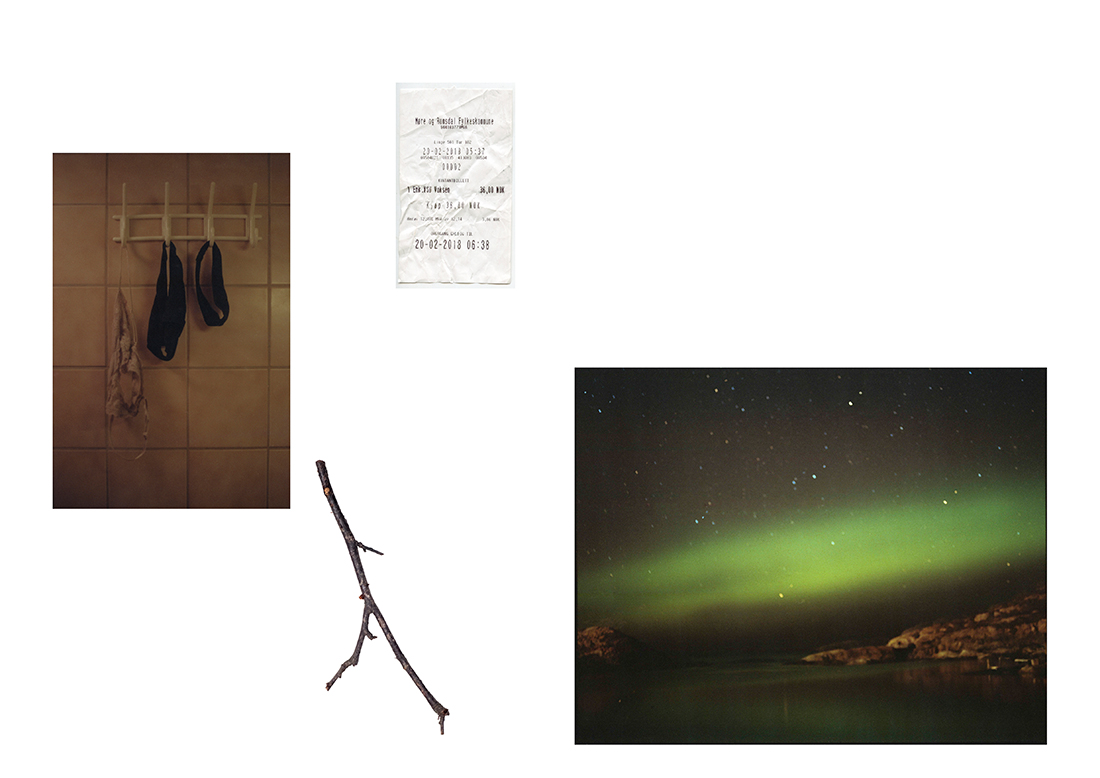 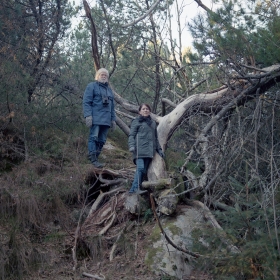 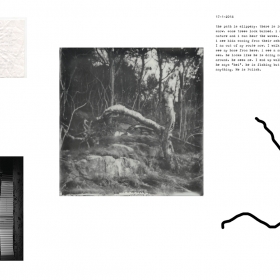 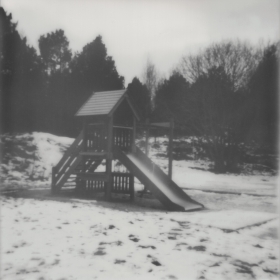 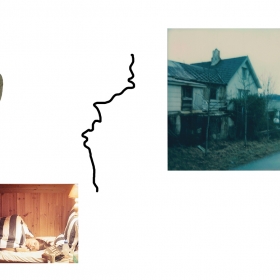 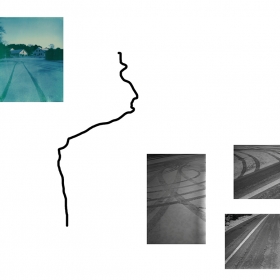 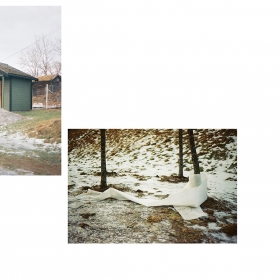 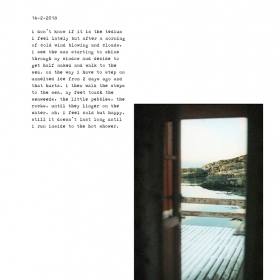 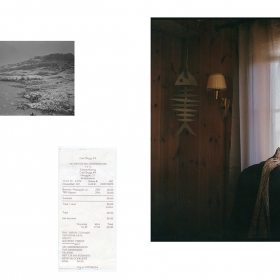 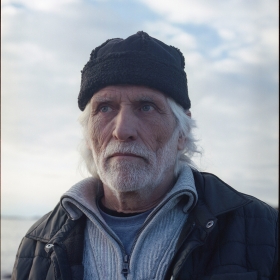 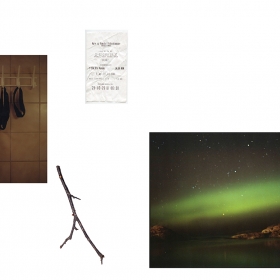 Ines Marinho
When a ship goes by
Share
Support this photographer - share this work on Facebook.
On January 16th I arrived in Kristriansund for an art residency where I aimed to follow my childhood and teenage hood familiar routes in an unknown town. I wanted to understand how I could connect to a foreigner town and community through my own familiar paths. My starting point was to be my home, a little cabin at the sea.
On the 17th I started my journeys in the town.
I followed familiar routes, paths that I knew well in my hometown, that I did so many times over the years. They took me to school or to see my friends or to swimming training. But this time, I wasn’t in my hometown, I was in an unknown cold Norwegian town, where I knew no one.
I am an observer, but I never gave my journeys much attention, it was a repetitive, constant motion, that I took for granted.
In Kristiansund these same paths were completely strange and I was also a stranger. I took notice of everything that was around, even the silence. I stopped to stare at the different colours of the light and the hard surface of the trees. I paid attention to the whistle of the wind and to the conversations in a language I didn’t understand. In some routes I barely saw anyone and it gave me the chance to fully reflect on what I was seeing. Sometimes the white landscape set me in a nostalgic state, but some conversations made me hopeful.
I felt observed and self conscious most of the time.
I got mixed feelings about what I was doing and what I wanted to see. Going home wasn’t going home but it was something safe, I could look at the sea from any window, I could close my eyes and listen to the waves. Also, my things were there, it helped giving me a sense of belonging.
As the days got bigger, I started dreading the time, my paths seemed repetitive and I barely knew anyone. I wasn’t lonely, but I was longing for change.
I ended up in a state of paradoxical boredom and awe. I disregarded my routes. I focused on the experience of the experience of finding oneself. Sometimes I tried breaking the lethargy, other times I explored it - I made myself go deeper into it.
It was about finding home abroad, but I found myself, alone, fragile, strong, confident, running to the cold sea, barefoot on the ice.
On the last night, the forecast predicted that northern lights would be seen so I stayed awake watching the sky feast. Some hours later, I locked the door of the fishing cabin I had lived in and left Kristiansund. It was the 20th of February.

About author:
Inês Marinho (b. 1990) is a photographer from Vila do Conde, Portugal.
She studied Communication Design at the Faculty of Fine Arts of the University of Porto and holds a master degree in Professional Photography at the Istituto Europeo di Design in Madrid.

She focuses her work on fashion and documentary photography and has been published in magazines such as Fotoroom, GUP, i-D (Spain), Ignant, Typical Girl, Fisheye, among others. Her work has also been selected for several online group exhibitions in magazines such as Ain’t Bad, F-stop and Float magazine and at the Lethes Art Festival in Ponte de Lima (Portugal).
She was the Winter artist in residence in Nordic Lights Festival in Kristiansund, Norway (January — February 2018). She was selected for the „Debut 2018“ competition exhibition (Lithuanian Photographers Association) and shortlisted for the IWPA 2018 award (International Women Photographers Association) and she is currently working on personal projects and as a freelance fashion photographer, in Portugal.