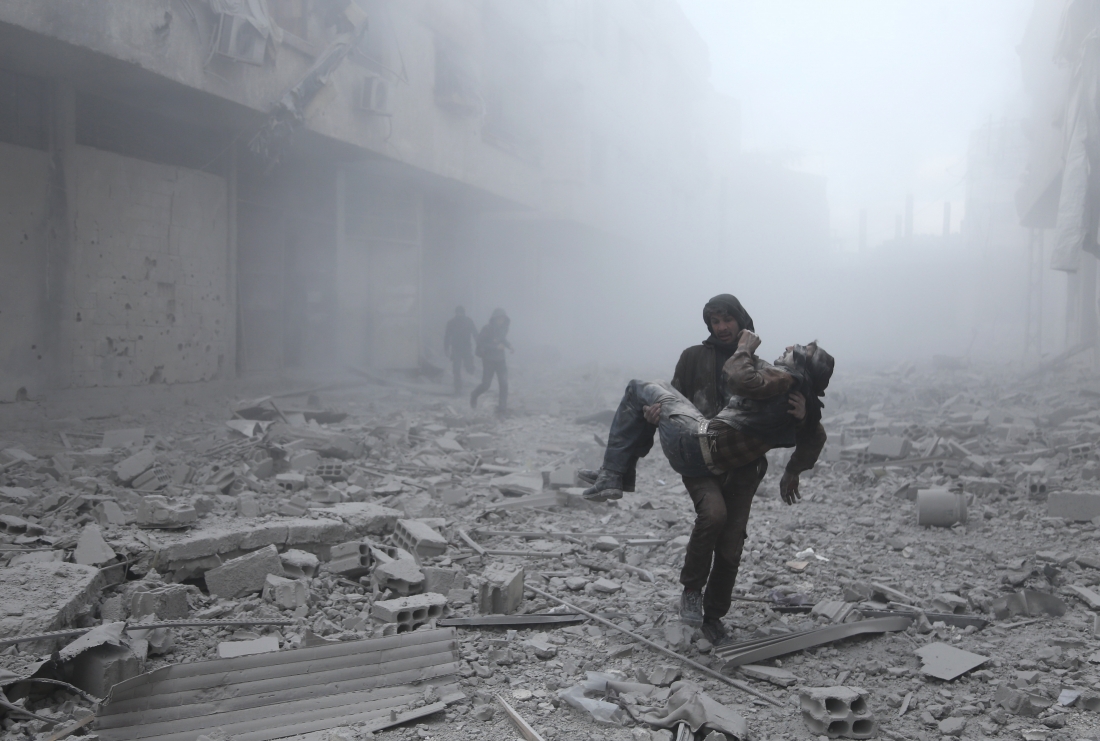 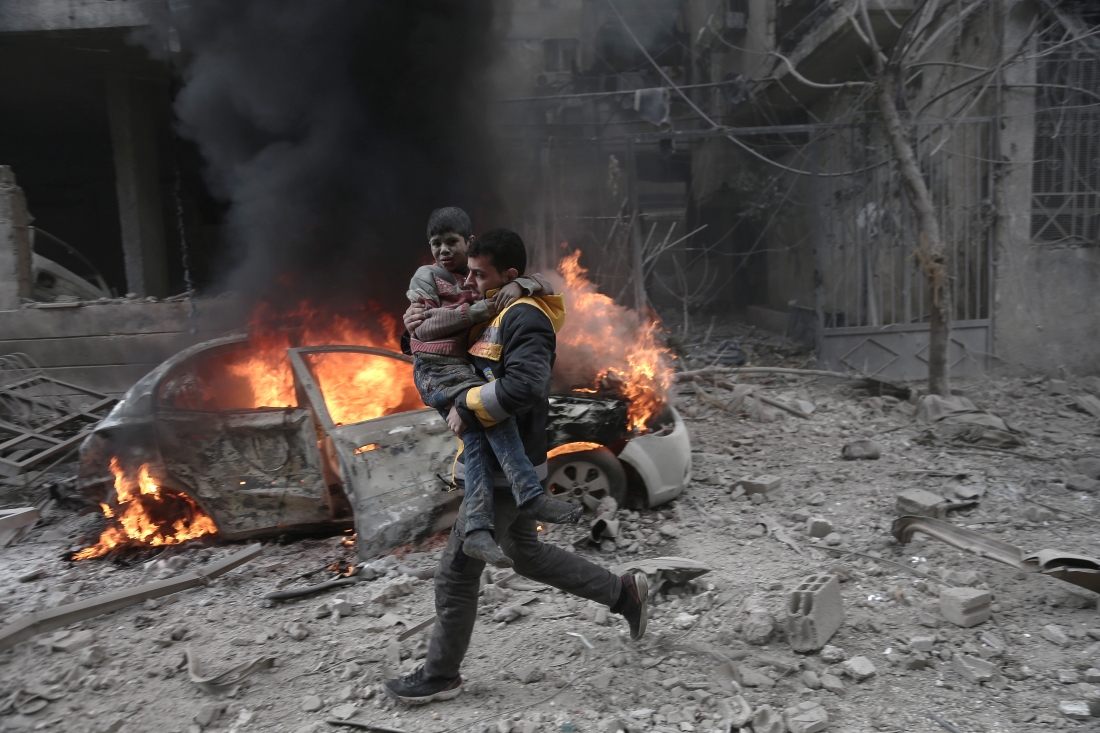 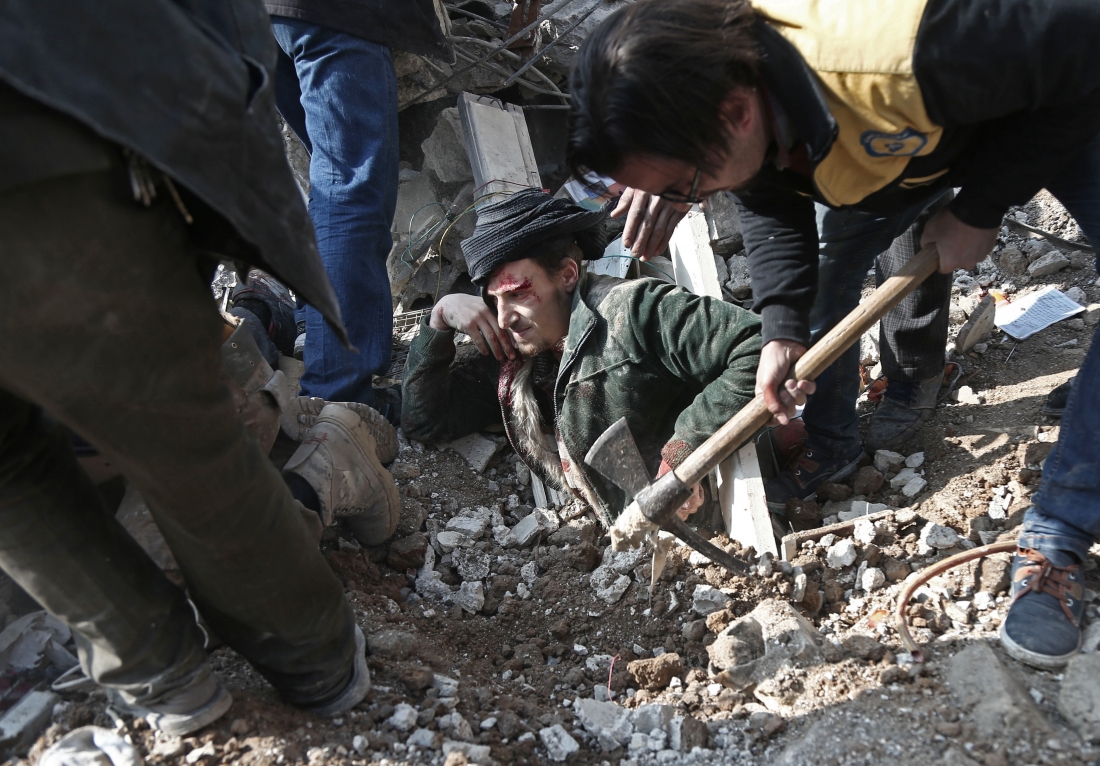 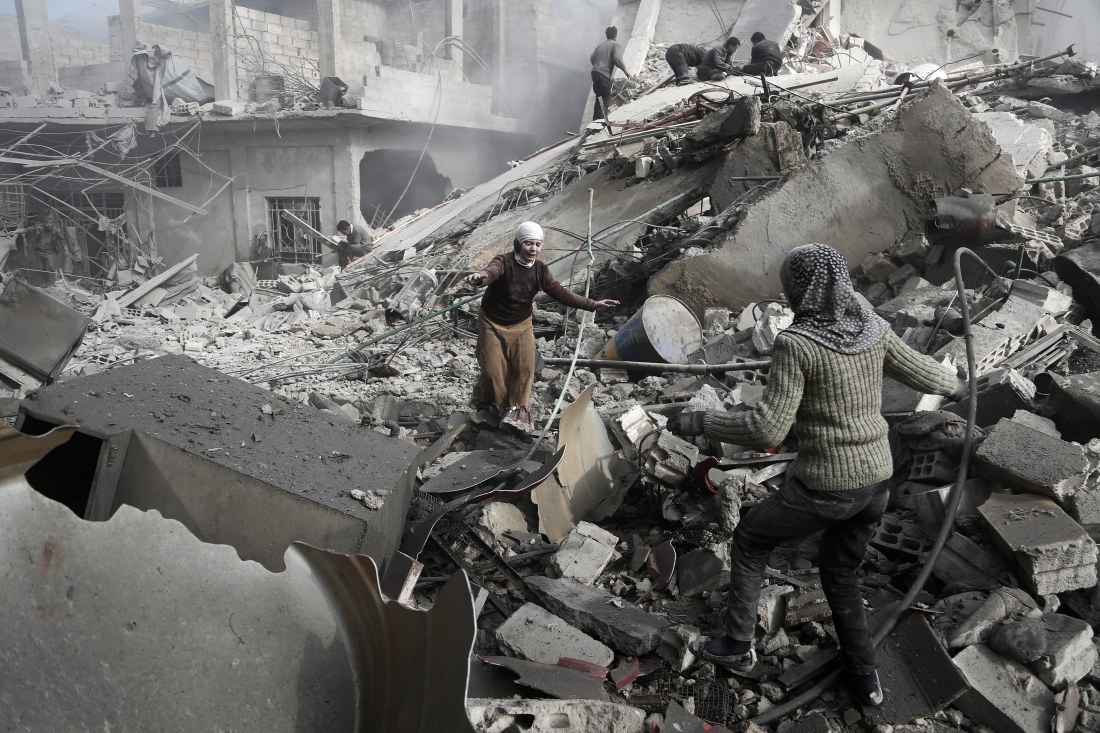 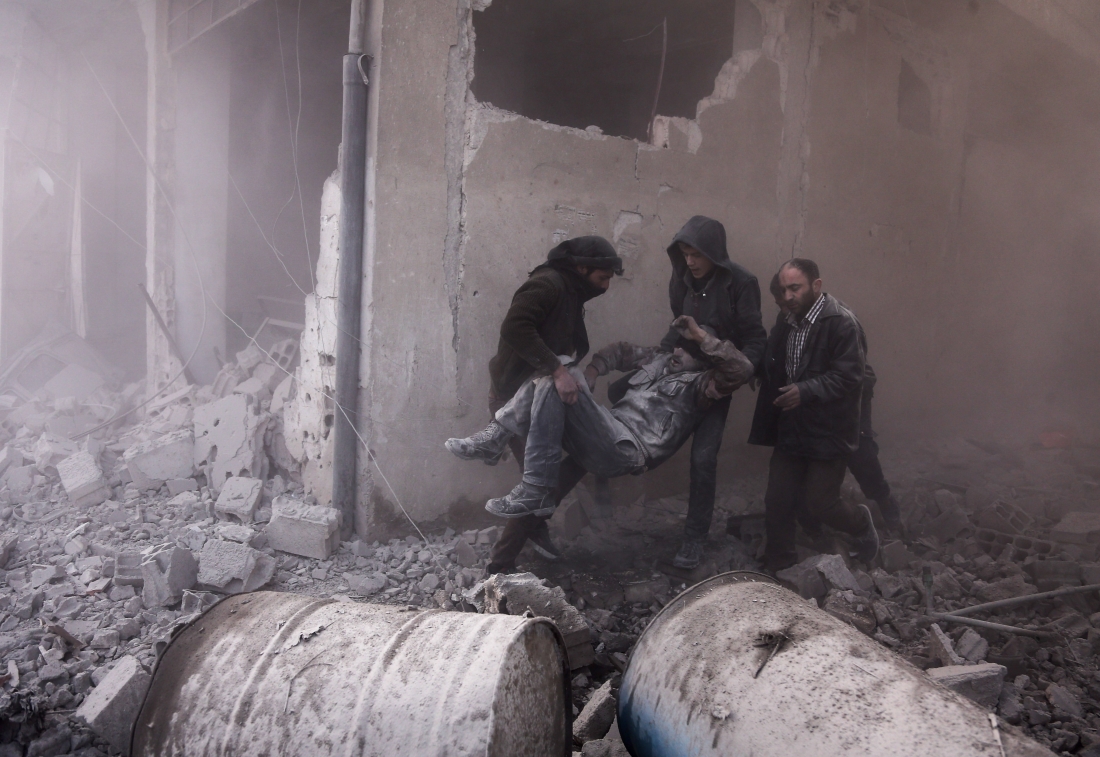 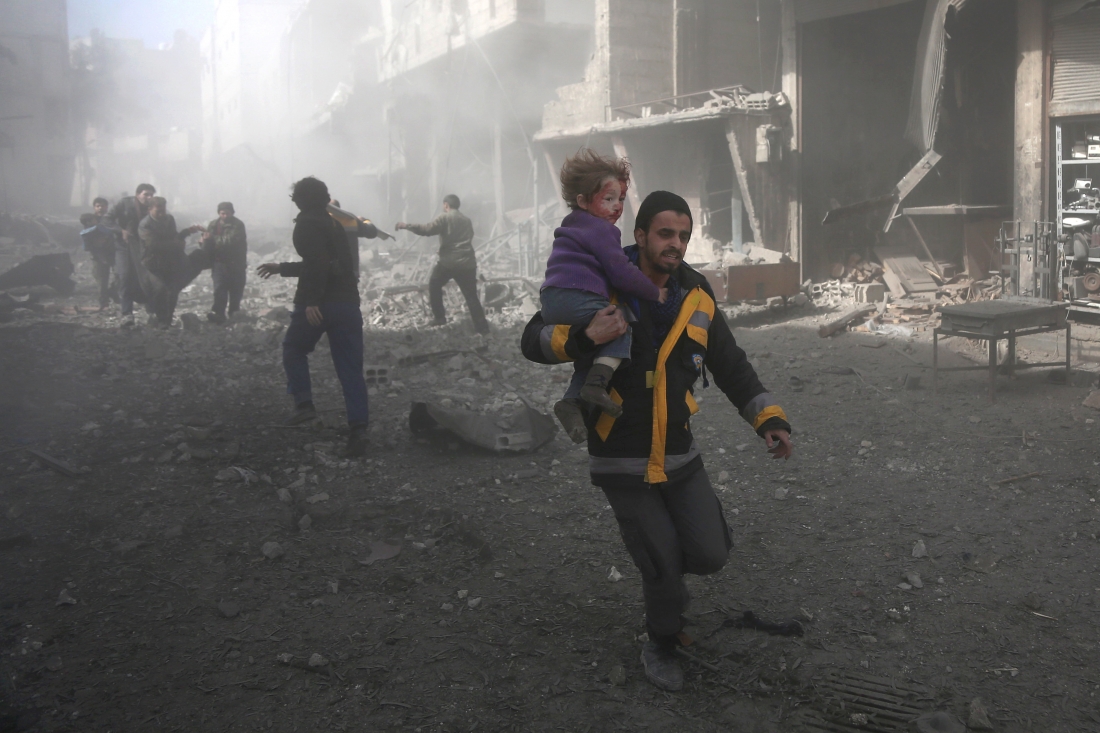 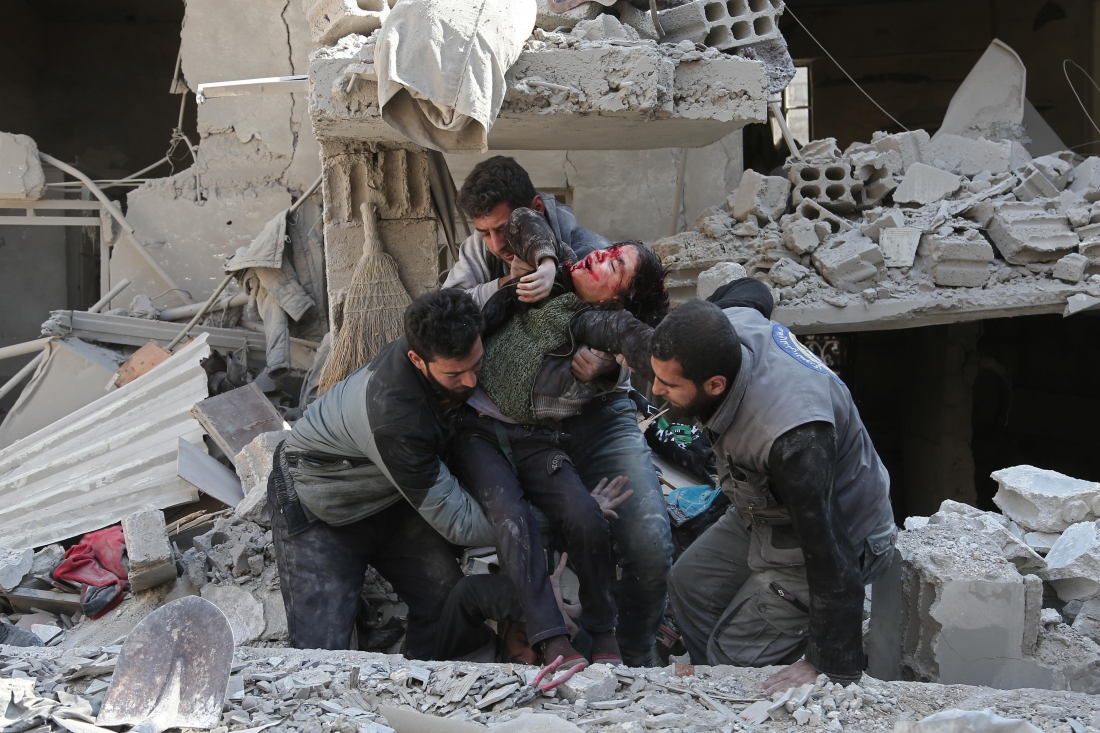 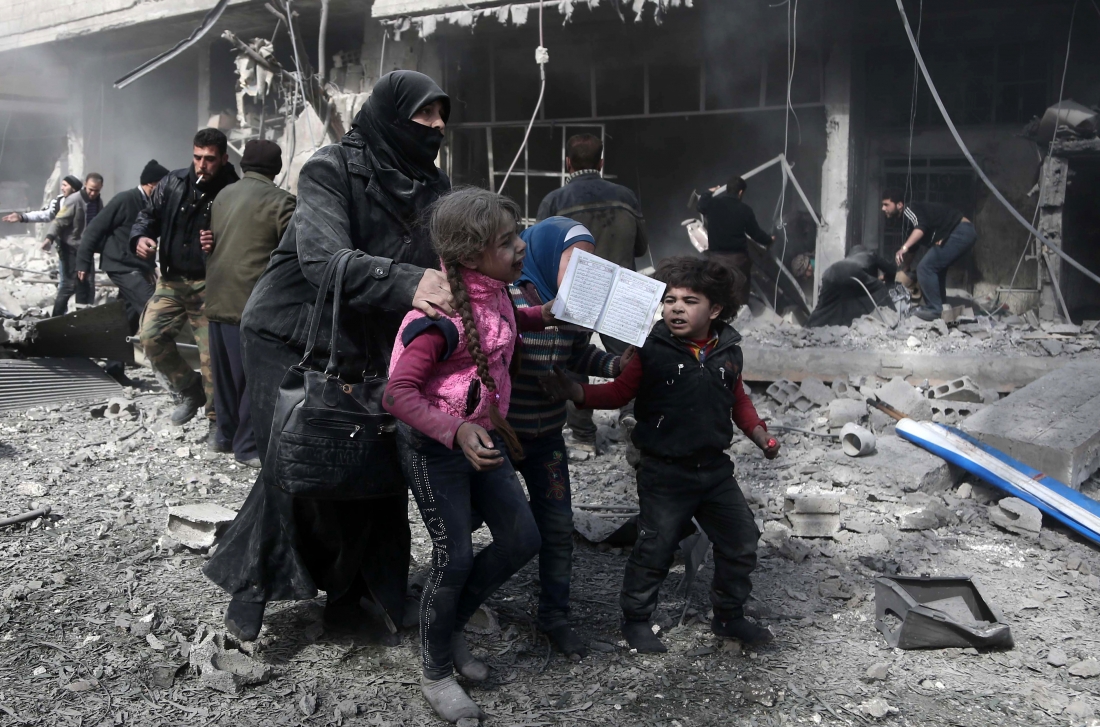 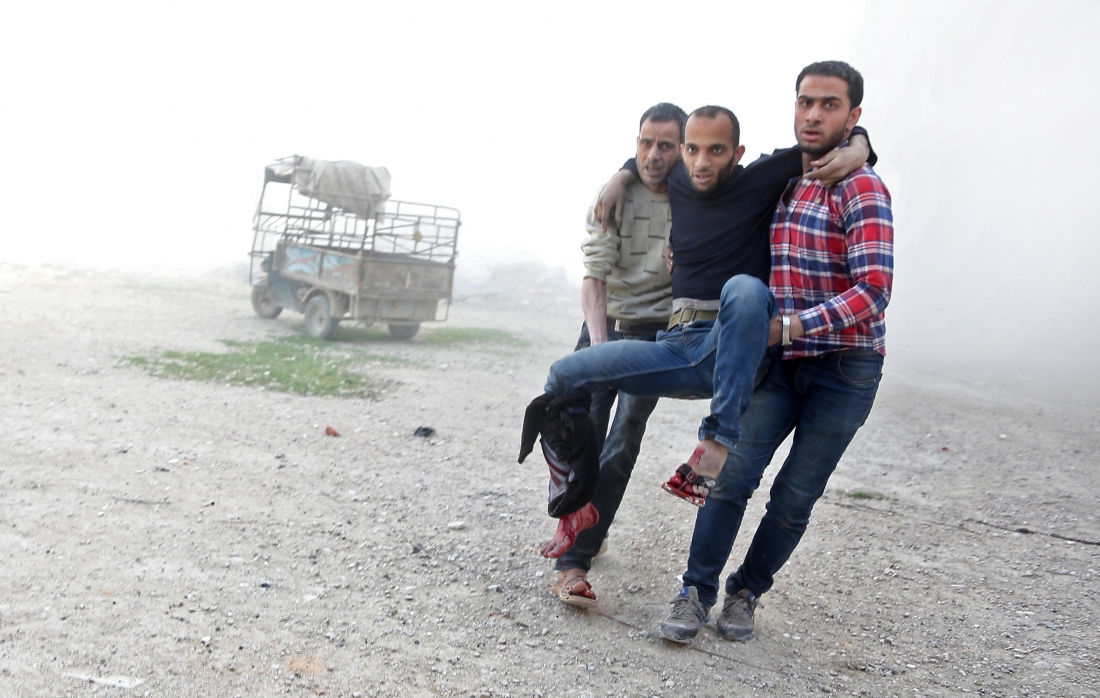 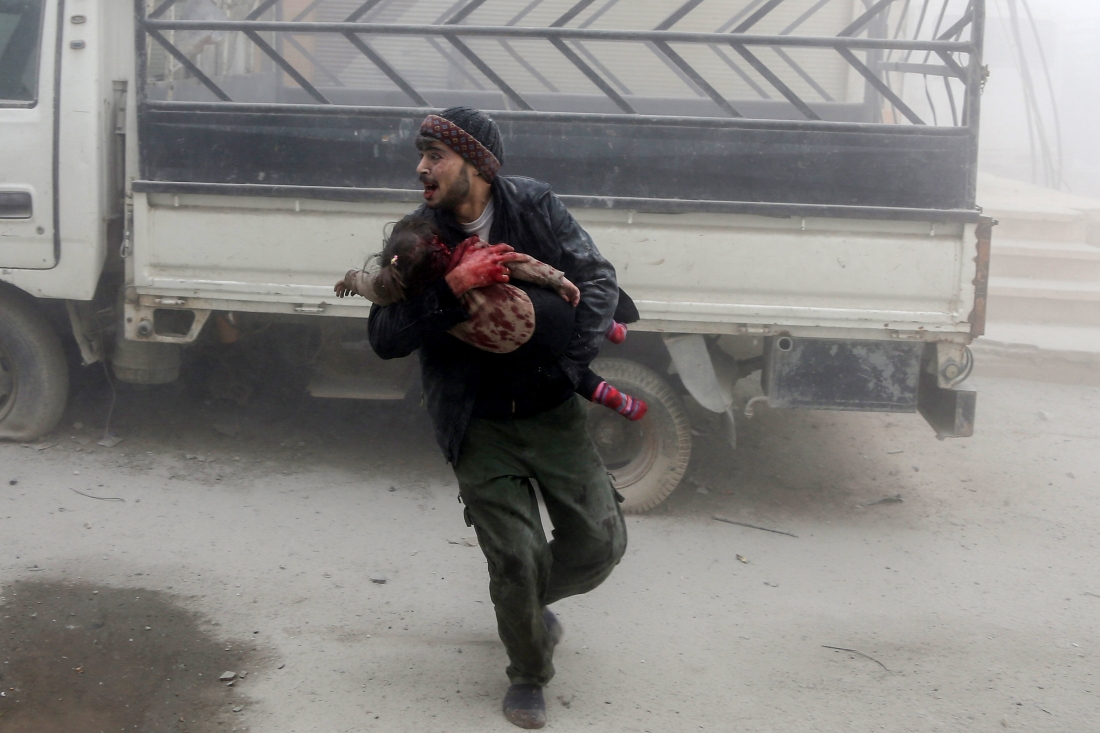 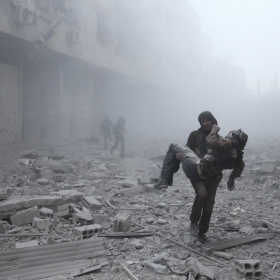 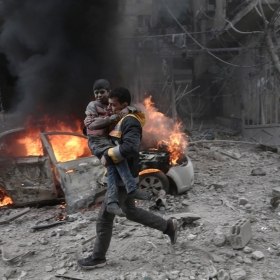 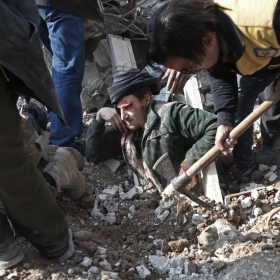 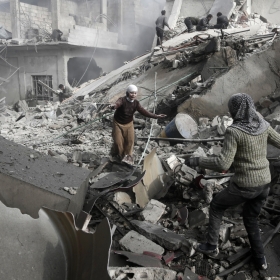 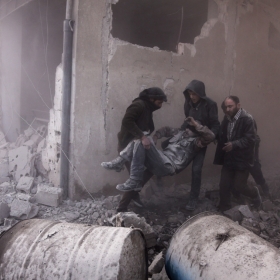 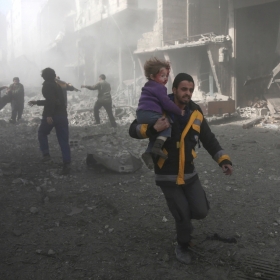 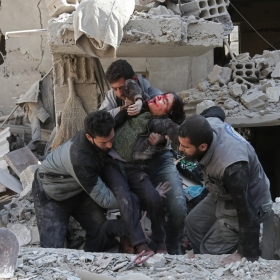 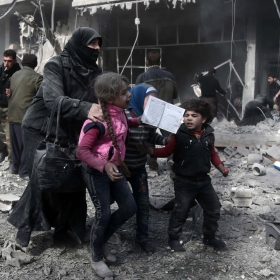 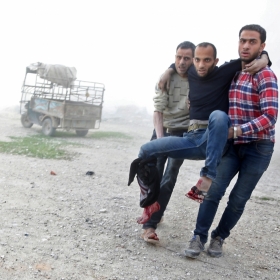 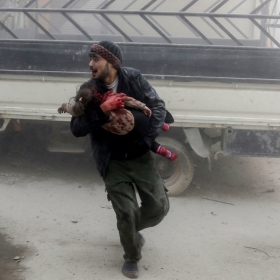 Abdulmonam Eassa
With Their Bare Hands
Share
Support this photographer - share this work on Facebook.
After the war had wiped out every trace of normal life, the people living in the besieged area of Eastern Ghouta on the outskirts of Damascus were often deprived of even the most basic tools and equipment. With nothing but their bare hands they carried the wounded, desperately tried to stop the bleeding, or dug out family and friends from under the rubble. Seven years of war has changed Ghouta beyond recognition. Not only the physical appearance of the area, but also the very basics of organizing daily life. For as long as the rebel-held enclave was under siege from the government forces it was completely cut-off from the outside world. In many cases, this left rescue workers, volunteers, and paramedics with their own bodies as the sole instrument to save the lives of so many thousands of people who were trapped under siege. This project documents the resilience and desperation of those men and women who saved thousands of lives with nothing but their bare hands.
Photos by: Abdulmonam Eassa via AFP.

About author:
At only twenty-four years old, the Syrian photojournalist, Abdulmonam Eassa, has already witnessed and documented the destruction of his hometown of Hamouria, on the outskirts of the capital.

Though many would turn rancorous towards a world plagued by violence and injustice, Abdulmonam exudes tranquility. He opens up, with a kind stare and a charming smile.

His high school studies were indefinitely paused due to the enforced siege on his area. The Syrian government forces cracked down on Hamouria to fight the rebel control. With the restricted mobility, Abdulmonam and his friends had a lot more time on their hands. To shed light on their reality, they embarked on the unplanned journey of photojournalism by capturing the violence that surrounded them.

The siege started when he was 18 years old.

Now, six years later, Abdulmonem and his friends have dispersed throughout the four corners of the world-- their fate determined by where they were granted asylum.

Starting as an independent photographer, Abdulmonam posted the powerful and informative photos to his social media platforms. Soon after, his work began to be published in local agencies. By 2015, Abdulmonam started working as a freelance photographer for the world-renowned Agence France-Presse (AFP), until he was forcibly displaced by the Syrian government in 2018.

With a humble yet prideful tone, he recognizes that over one thousand of his photos have been published by the AFP: documenting the siege, the lives of families and children in the area of Eastern Ghouta, and the rebel fighters.

The importance of his community and its’ camaraderie permeates Abdulmonam’s discourse. He attributes his growth as a photographer largely to those who helped him along the way. For him, his success happened hand in hand with that of his friends.

“I depended on my friends to improve my skills. We all learned together. Besides getting inspired by pictures on the internet, we gained experience by self-training. I witnessed a lot of death, and I wanted to share with the whole world all that I could manage to document, especially, the airstrikes that led to the death of hundreds of innocent civilians.”

In February and March of 2018, through text, photo, and video, he broadcasted the massacres in Eastern Ghouta. In hopes of wiping out rebel groups, the Syrian government forces, with the support of the Russian Air Force's launched a military operation. However, many civilians, including many Abdulmonam knew, lost their lives in the conflict.

In the midst of the destruction, his home was bombed, along with many of its surroundings. Instead of crumbling under the ruins, the young man stood stronger and invested himself in rescuing the civilians in the aftermath of airstrikes during those two horrible months.

“During the 5 years that I lived under the siege, I was injured three times while doing media work.”

An agreement between the Syrian government forces and the rebel faction forcibly displaced everyone from Hamoria, and its’ surrounding territories to the north of the country.

After arriving in North of Syria, Abdulmonam tempted to cross the border, into Turkey, with nine failed attempts. After receiving threats from a police officer, for being one of the only journalists documenting the air raids, he knew this was the appropriate time to flee. At the the tenth crossing, it was a success.

As he recounts these moments, a sense of excitement and a slight nervousness runs through his body. Although a relief to have arrived in Turkey, at the beginning of May 2018, the young man was there illegally, which made him feel unsafe and limited his ability to work.

Filing various asylum requests, after a few months the life changing news came in: France was his new home. Filled with gratitude and ready to start a new life, he arrived in Paris on the first of October.